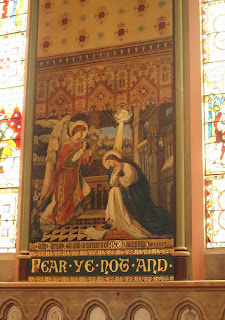 One of the great things about Open House is the chance to discover an amazing place completely by chance, just because you happen to be passing or because it's near somewhere else on your list. I had that experience with St Margaret's Church, Lee. The outside is pleasant but doesn't prepare you for the stunning Victorian interior.

The church was built in 1841 to replace a mediaeval one across the road. When the new church was remodelled in the 1880s, its interior decoration was entrusted to the firm of Clayton & Bell. They were connected with many of the leading figures in the pre-Raphaelite and Gothic movements - Clayton was a close friend of Rossetti and worked for Charles Barry at the Palace of Westminster - and as well as wall painting, developed great expertise in stained glass. All of these skills and influences are apparent in the decor at St Margaret's. There is currently an exhibition in the church, illustrating how the scenes depicted in these wall paintings have been portrayed through six centuries of art. 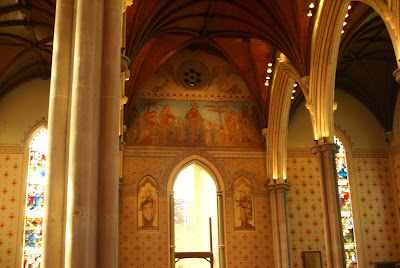 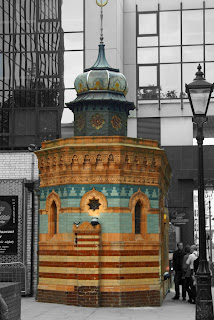 Very different in scale and purpose, but equally lovely, is this entrance kiosk for a Victorian Turkish bath (now Ciro's Pizza Restaurant) in Bishopsgate Churchyard. The actual baths/restaurant are underground, but far from gloomy since the decorative exuberance continues inside. Built in 1894, they were one of proprietor James Forder Nevill's chain of nine Turkish baths, and contained a shampooing room, three hot rooms, shower bath and plunge bath. Since it was aimed at City workers, admission was not cheap - 3 shillings and sixpence, less after 7pm.

The first public Turkish bath had come to London in 1860, and the fashion spread rapidly. Among its (fictional) fans was Dr Watson, although Sherlock Holmes was apparently rather less impressed:

"The bath!" he said; "the bath! Why the relaxing and expensive Turkish rather than the invigorating home-made article?"

"Because for the last few days I have been feeling rheumatic and old. A Turkish bath is what we call an alterative in medicine--a fresh starting-point, a cleanser of the system."

By 1902, however, Holmes's attitude had softened and he was a regular at one of Nevill's other establishments, in Northumberland Avenue:

Both Holmes and I had a weakness for the Turkish bath. It was over a smoke in the pleasant lassitude of the drying-room that I have found him less reticent and more human than anywhere else.

Sadly, most of these Victorian baths have disappeared; the Bishopsgate bath closed in 1954. However, a few later examples remain in full operation, notably the 1920s Porchester Spa and Islington's Ironmonger Row (1938). For a taste of the full nineteenth-century experience in London, though, it might be worth going for a pizza...

That looks like a wonderful little gem amongst all the glass and steel - I am going to be seeking it out next time I'm around that area!

By the way, the Victorian Turkish baths in Harrogate, run by the council, are well worth a visit. They were refurbished fairly recently but still retain many original features.