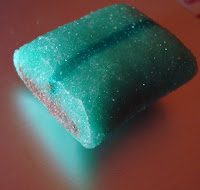 No, the title doesn't refer to some weird cannibalistic incident - le coussin and cervelle de canut are two of Lyon's gastronomic specialities. Neither contain actual silk or weaver...
The gaudy green chocolate here is a coussin, created in 1960 to commemorate a bit of local history. Back in 1643, a plague epidemic threatened the city so the aldermen offered the Virgin Mary a deal. If Lyon was spared, they would walk in procession up to Fourviere (now the site of the basilica) to offer a large wax candle and a gold coin on a silk cushion.

The epidemic was duly brought under control, and the procession up the hill became an annual event. The chocolate represents the silk cushion involved: it's made of cocoa flavoured with curacao liqueur, wrapped in green marzipan. Invented by the chocolatier Voisin, it's still the centerpiece of their shop window: 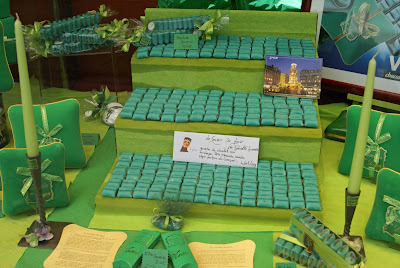 Less colourful but even more delicious is cervelle de canut, or silkweaver's brain. Far from being another of the city's offal specialities, this is actually a cheese. Fromage blanc, a very soft, mild cheese, is flavoured with garlic, chives and shallots. The resulting concoction can be eaten as part of a cheeseboard, spread on bread, or used as a dip for crudites. This one was part of my cheese plate at the Cafe des Federations.

Email ThisBlogThis!Share to TwitterShare to FacebookShare to Pinterest
Labels: food and drink, lyon