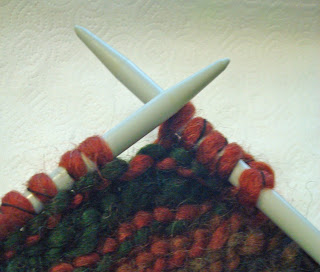 I've just started knitting again, for the first time since my schooldays. So far it's more like a fight to the death between me and my wool than a creative craft activity (and I'm not winning...). All the same, in honour of the couple of inches of wonky scarf I've managed so far, here are eight historical facts about knitting in Britain:
- October 27, 2008

no no no the teacosy is very much in fashion, especially since the resurgence of knitting as a craft! (see this recently published book http://www.thegmcgroup.com/item--Tea-Cozies--GM-COZIES-0.html). I myself have knitted a dozen or so as gifts over the last few years and not one of them is languishing unused! Delighted to see you taking up this wonderful craft, and hope that you will come along and join the Meantime Knitters (next meeting Sunday 2 Nov in the bar of the Greenwich Picturehouse at 4pm). We can offer you help and encouragement in your struggle! The Dame (aka Knit Nurse)

No disrespect meant to the tea cosy! It's definitely one of those things that's great to have back in fasion, along with afternoon tea and cake of course. I'll try and get to the meeting, I need all the help I can get!!