I've already posted about the 500 years of female portraits in Western art video and the near-absence of women artists. While the video deservedly won praise, however, one question was asked repeatedly: why are there no images of black women?

Of course black women have been represented in Western art. However, even when they are there on the canvas they can still be treated as invisible. I've discussed the career of Victorine Meurent, Manet's favourite model and an artist in her own right. In one of her most famous portrayals by Manet, as the courtesan Olympia, there is another women in the image too: a nameless black servant carrying a bouquet. History has been even harder on her than on Meurent: this model's name is not known. Wikipedia refers to "the model" in the painting, as if there were not two women present; a Salon article discusses the painting and the figure of Olympia at length but barely mentions her maid. This is not to suggest for one moment that there are not analyses of race in art: the point is that they have been ignored by these mainstream discussions of such works. 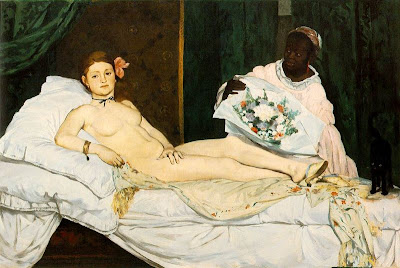 The courtesan's challenge to the viewer is perhaps in part due to her dominant position in the painting, able to ignore her submissive black maid. The maid herself adopts a more traditionally female pose, her eyes turned to the side rather than meeting and challenging those of the viewer. Her face almost merges into the background; more visible are her dress and the flowers she carries to Olympia - the image obscures her even as it portrays her. At a more symbolic level, in the nineteenth century racially "other" women were often viewed as more sexualised than white European women, so that the presence of a black maid functioned to highlight Olympia's own (excessive) sexuality.

To focus upon both figures in the image, rather than to treat the maid as background decoration, is to change the way we read the painting altogether. It shifts from being a portrait of one woman to something more like a narrative work where we ask questions about the nature of the interaction and relationship between the women. Our experience and understandings of the work can then become all the richer.

Thus there are racial as well as gender dynamics to this painting which merit being placed in the foreground. (Nor are they purely historical: see the analysis of a contemporary image here.) It is unfortunate that so many discussions of the image leave them as obscured as the maid herself.