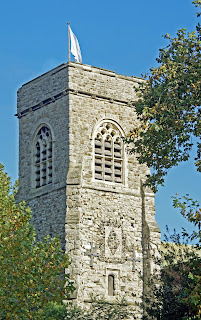 Deptford X art festival is well underway, and I had time this weekend to enjoy some of the events. They're just a sample, because the festival is huge in scope and still has a week to run, but they do give some idea of the variety on offer.

St Nicholas's Church is the venue for two works. Yinka Shonibare's White Flag at Half Mast, literally a white flag, flies from the top of the tower. You can view it from below, or climb the narrow spiral stairs to get up close (Saturdays only). I would have loved to do the latter if only for the views over Deptford, but spiral-staircase-specific claustrophobia kept me at ground level! I found the flag rather unexciting, but one advantage of so much artwork packed into a small area is that there's always something else to see. In this case, I just strolled down into the crypt for Matt Stokes' video Cipher whose organ music also echoes rather atmospherically around the church nave.

In the courtyard behind the Deptford Project cafe are a variety of works: 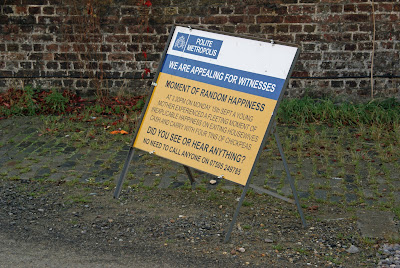 The Creekside Centre also has an assortment of pieces, based upon things found in the creek: 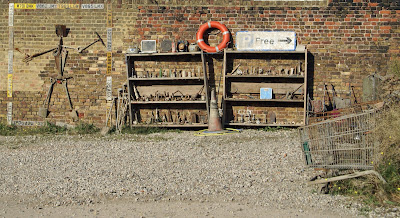 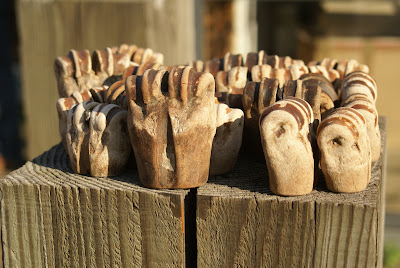 Fran Cottell has placed Golden Balls around Deptford in reference to the golden pawnbrokers' sphere, itself symbolising money. (Deptford Dame has done a better job of spotting them than me). This pair are only a few doors from a couple of genuine pawnbrokers: 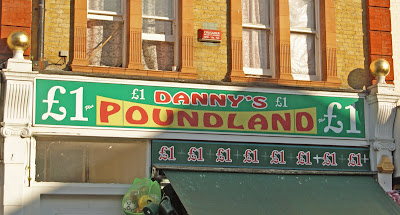 An audio tour, Pavement Sonnets, Deptford Scars, links many of the sites. The start is a little off-putting ('this is a walk, not a stroll') but once you're underway the walk is fascinating and full of local history. Download audio files and map here, and start at Ha'penny Hatch footbridge over Deptford Creek (which has one of Cottell's golden balls too). 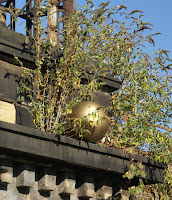 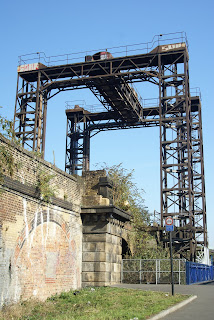 I've done more than appears here, but still barely scratched the surface of the festival. There's another week to try and catch up! For more information see the Deptford X website.

The big ball by the creek I think may have been taken down. I saw someone carrying a large gold gym ball just by the Ha'penny Hatch so I looked for it and it was not there...

Oh, I wonder if it will reappear somewhere else?

Maybe it will be spotted in Wavelengths gym...

Just saw the ball on Transpontine

That was definitely it. I must have walked past Fran Cottell, possibly on her way to the gym...

I've only just come across your interesting blog. The Deptford post reminded me of my time living in SE London more than 10 years ago – I must revisit the area soon. Thanks also for linking to English Buildings.

Thank you Philip - and I was really pleased to find the English Buildings blog, one I'll definitely be browsing regularly!