Grinling Gibbons was born in the Netherlands in 1648, probably to an English father; we know little of his childhood. By 1671 he was living in "a poore solitary thatched house" in Deptford and possibly engaged in ship-carving. Here the diarist and owner of Sayes Court, John Evelyn, discovered him by chance and recognised his extraordinary talent for woodcarving. Evelyn introduced him to Sir Christopher Wren; his career quickly progressed from that point and he worked for Wren on St Paul's Cathedral as well as being commissioned by Kings Charles II and George I. 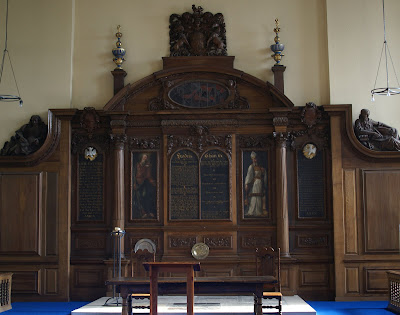 Gibbons died in 1720, leaving work in London churches and English country houses, as well as Windsor and Hampton Court Palaces. He also left behind a small mystery: how did he get such a polished finish when

sandpaper had not yet been invented? The answer was discovered by woodcarver David Esterly: the wood was rubbed with a common Dutch weed, Equisetum hyemale (horsetail).
Gibbons' reputation for woodcarving is unsurpassed; his carving of foliage was particularly admired as he introduced a new naturalness and informality. He also worked in stone, and one of his statues still stands at St Thomas's Hospital opposite the Houses of Parliament. It portrays Sir Robert Clayton, a former President of the hospital.
Despite his subsequent success, Gibbons apparently did not forget Deptford: a panel depicting Ezekiel in the Valley of Dry Bones, and possibly the magnificent reredos, in St Nicholas's Church are his work.
- October 16, 2008

I've often wondered what that statue at St Thomas' was, and why that little corner of the building, seemingly almost derelict, is preserved.

Yes, it seems a shame that there's no explanatory plaque. I only learned what it was on a guided walk by the Victorian Society.