When I visited the Limehouse Accumulator Tower as part of Open House weekend, I learned a great deal about the use of hydraulic power to operate locks and cranes in the docks area. However, I was also intrigued by the comment that this power was piped to the West End for use in theatres.

A little research confirmed that there was a network of underground pipes providing hydraulic power throughout London. The London Hydraulic Power Company was incorporated by Act of Parliament in 1871, and only closed in 1977. As early as 1893, six and a half million gallons of water were pumped each week; gradually, the company's reliable service took over from the smaller power plants providing the docks. 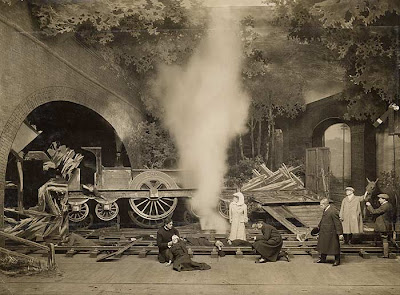 As well as its industrial uses (operating machinery such as presses), hydraulic power was indeed used by non-industrial customers such as theatres. In fact, the Theatre Royal Drury Lane had used hydraulic apparatus for a production back in 1829, over twenty years before hydraulic machinery was introduced to Limehouse Docks; with the availability of the piped network, its use took off throughout the West End. The Royal Opera House curtains and Coliseum turntable both used hydraulics, as did the stage machinery in other theatres - hydraulic power allowed new and dramatic special effects. Indeed, late-Victorian 'sensation' productions relied on such effects for their appeal. Theatre Royal Drury Lane's production of The Whip, for example, built up to a dramatic train crash live on stage followed by the running of a horserace (the horses ran on a 'travellator'). Such elaborate effects carried their own risks, of course - on the play's first night, its equine hero 'The Whip' lost the race and the judge's box shot into the air! (Luckily, the rest of the run went more smoothly, and it lasted for 388 performances and a successful tour). More mundanely, but crucially, when safety curtains became standard they were often made of iron - again, the ability of hydraulic power to lift heavy weights was invaluable. This form of power was also quiet, powerful and clean.

Hydraulics continue to be used for lifting and lowering stages such as the Lyttleton Theatre's proscenium stage today, although there is no longer a central supply to draw on. Instead, the underground network of cast-iron pipes (some 150 miles of it) is now owned by Cable & Wireless and carries optical fibre cable.

What a great picture. The most famous user of the London Hydraulic Company's network was, I seem to remember, Tower Bridge. It was only when the bascules were converted to electricity that the hydraulic pipe network could finally be closed.

That's right, the network was the back-up source for Tower Bridge (which also had its own system, and went electric in 1974).