London sightseeing: when did it get so slow? 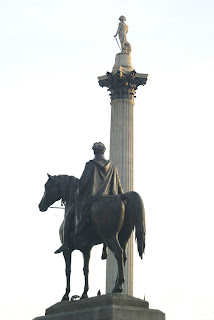 No, this post isn't going to be a rant about tourists who stop dead in the middle of the pavement or amble along in huge groups in the middle of rush hour (tempting as that is!). Rather, it was prompted by considering some 'London in a day' sightseeing itineraries of the past. They make today's hop-on, hop-off bus tours seem a very lazy option!

As recently as the 1950s, Ward Lock's London suggested the following itinerary, apparently to be completed largely on foot, for 'London in one day':

Particularly impressive is the expectation that you will actually go into the institutions not marked 'exterior only': 4 art galleries, a museum and two cathedrals in a day doesn't allow much time for contemplation. (There were also suggestions to fill the remaining daylight hours should you be staying overnight).

The 1920s had been equally hectic: Enquire Within Upon Everything didn't set out an itinerary but did expect that a visit to, for example, the Tower of London would be grouped with 'St Paul's, the Bank, Royal Exchange, Monument, Mansion House, Guildhall, and so on'. However, such exertions pale beside one Victorian's epic sightseeing.
When James Patterson visited relatives in Camden, he was determined to 'see' London. Thus on 27 December 1858, he met his uncle in Albany Street from where they spent a day's sightseeing on foot which included St James's Park, Westminster, the Abbey, Charing Cross, Trafalgar Square, the National Gallery, Covent Garden, Waterloo Bridge, the Strand, St Paul's, Guildhall, London Bridge, a steamer to Greenwich passing Milwall shipyards where the Great Eastern was being built, a tour of the Royal Hospital and its paintings, a walk through Deptford Dockyard to see more ships being built, then through the Thames Tunnel from Rotherhithe to Wapping, St Katherine's Docks, Tower Hill, and finally a train home. Compared to that marathon feat, Ward Lock's tour is for lightweights!
I was introduced to James Patterson at a lecture by Chris Hilton, Senior Archivist at the Wellcome Library. It was part of a day of events to launch Medical London, a boxed set including book, gazeteer and walks which I'd highly recommend.
Related post: Advice to sightseers
- October 20, 2008