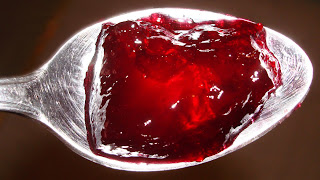 One of the greatest free foods is the blackberry - even if picking it is liable to leave you covered in scratches and frustrated at the way the best berries always seem to be just out of reach. Sadly, many of the places that used to be good for blackberrying are now built over, but it's worth hunting out some brambles or growing your own. In Brittany this summer, I picked kilos of the fruit and made most of it into bramble jelly.
The best berries are those that ripen first, but there's another reason to stop picking them now: they've been touched by the devil! My vague suspicion that this tale was invented by my mum when she couldn't stand blackberrying any more was wholly unfounded; in fact, it's a longstanding belief which is found in many parts of Britain.

The story is that the devil was thrown out of heaven by St Michael on 11 October (Michaelmas Day in the old calendar),* and landed in a blackberry bush. Still angry at that prickly landing, he spits on the berries every anniversary, making them inedible. (In some versions of the legend, he pees on them). Since blackberries are indeed past their best by now, devil's work or not, it's a good day to exchange brambles for bramble jelly!

* Leap year's days don't fully correct the calendar, so by 1752 it had got eleven days ahead of where it should be, meaning solstices, equinoxes and so on were happening on the wrong days. To correct the problem, eleven days were simply left out of September that year, so we went straight from 2 September to 14 September. That pushed some events, like Michaelmas day, 11 days back too. Don't worry, we shouldn't have to lose any more days - we now leave out the leap year's day at the turn of a century unless it divides by 400 (so 1900 wasn't a leap year but 2000 was), which keeps things as they should be.
- October 11, 2008

Yum! I love beautiful ripe blackberries - perfect for making deliciously rich smoothies. Although, curiously, I heard about one Richmond Park picker who was cautioned by parks Police this year- so a curse and a crime!