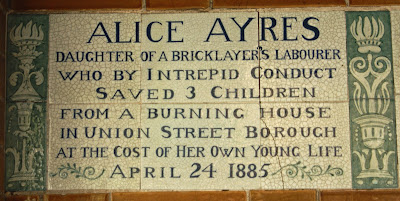 Alice Ayres was employed as nursemaid to her sister Mary Ann or Martha Chandler's children; neighbours described her as a quiet, hard-working young woman. She and the Chandler family lived at 194 Union Street, Borough, above a shop. When a fire started in the shop during the night of 25 April 1885, Alice and the children (aged about 6, 2 and 9 months) were sleeping upstairs. Alice went to the window with one of the children, manoeuvred a feather mattress out of the window, then dropped the child to safety. Instead of saving herself next, as the crowd outside begged her to, she went back twice more, rescuing the other two children (although one would not survive the fall).

Finally, she tried to make her own escape - but too late. Smoke inhalation and exhaustion meant that she fell awkwardly, hitting the shop front and then the pavement with great force. She died two days later in Guy's Hospital from severe spinal injuries; she was 25. She was buried in an elaborate public funeral and her grave was marked with a granite monument paid for by public subscription. Her conduct was also recognised by the Society for the Protection of Life from Fire, which sent a letter of commendation and ten guineas to her father.
Alice thus became a popular Victorian heroine, whose story was published not only in newspaper accounts but also in several collections of inspirational stories. As late as 1936, a Borough street was renamed Ayres Street after her. However, her story would probably be forgotten by now were it not for the unassuming plaque in Postman's Park which reads:
ALICE AYRES, DAUGHTER OF A BRICKLAYER'S LABOURER, WHO BY INTREPID CONDUCT SAVED 3 CHILDREN FROM A BURNING HOUSE IN UNION STREET BOROUGH AT THE COST OF HER OWN YOUNG LIFE, APRIL 24 1885
For all Postman's Park posts, click here.
Updated Dec '08 - thank you to Geoff Ayres for further information.

This memorial to Alice Ayres featured in a film starring Jude Law and Julia Roberts -- "Closer". One of the main characters in the film, a woman from the US, saw the memorial and adopted the name of Alice Ayres as her pseudonym in London. She lived under it for several years, not even telling her live-in boyfriend, the Jude Law character, her real name. Only at the end of the film does the viewer understand that the name was a fake one, when Jude Law's character happens to see the memorial to the real Alice in the park next to St. Paul's and understands that his now ex-girlfriend had stolen the name of "Alice Ayres" on a whim, on the day that he met her.

The film, Closer, is actually based on the play by the same name, written by Patrick Marber. Postman's Park is mentioned several times throughout the play by the characters Dan and "Alice."