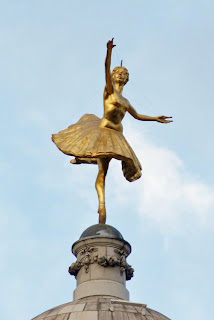 Anna Pavlova, the famous Russian ballerina, was born in Saint Petersburg in 1881 and died in The Hague just short of her 50th birthday in 1931. However, she has a strong presence in London: her house, her ashes and her statue are here.
In 1912, Pavlova bought Ivy House in Hampstead, which now bears a commemorative blue plaque. She had already enjoyed success in London, so when Alfred Butt built the Victoria Palace Theatre in 1911, he put her statue on top in tribute to his having introduced her to the city. Unfortunately, the compliment failed to please Pavlova who instead felt a superstitious dread of it and refused to look at it. She might not have been disappointed, then, had she lived to see the statue taken down in 1939 for safety. After the war, the statue had disappeared; it has never been found but a replica was put up in its place in 2006.

Pavlova formed her own ballet company which toured the world, an innovation which brought ballet to many more people than would otherwise have seen it. Travelling on a train in the Netherlands which derailed, she got out in her nightclothes to see what had happened: she contracted pneumonia, and died holding her Dying Swan costume in the Hotel des Indes a few weeks later. Her cremation took place near her home in London, at Golders Green crematorium where her ashes remain.

However, for all her London connections it must be admitted that Pavlova's sweetest memorial was invented in New Zealand: the pavlova dessert, a confection of meringue, fruit and cream.

Hello! Pleased to meet you. This is my first time here...I found you through a google search for blue plaques, of all things. ;)

Pleased to meet you too! Glad you found me, and I hope you enjoy the blog.