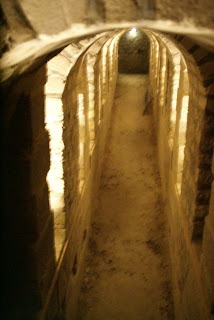 Among Paris's more unusual attractions is the walk through several kilometres of quarries and catacombs starting opposite the Denfert-Rochereau metro station. However, it represents only a tiny fraction of the huge network of tunnels running under Paris, which first helped build the city and then nearly undermined it altogether.
Quarrying for stone under the city began in the 13th century, when Paris was the site of major building projects including palaces, churches and houses. The quarries, in what were then the outskirts of the city, were underground in order to avoid damaging fertile farmland. The exploitation of Paris's depths would continue over the following centuries; while stone was quarried in the Left Bank areas, Montmartre was a source of gypsum (which gave plaster of paris its distinctive whiteness).

By the late eighteenth century, the honeycomb of tunnels was a real danger to the city above. Collapses occurred from time to time: roads and buildings would disappear into holes in the ground. Thus in 1777, a General Inspectorate of Quarries was appointed to supervise and consolidate the underground works. New quarries were banned, and exploitation of existing ones phased out. Shoring-up of the voids left behind was also a priority.

One of the most successful new uses for the abandoned quarries was as a location for Paris's mushroom-growing industry. By the early nineteenth century, the underground mushroom farms were producing 25 tons per day. However, production and demand continued to grow and, too constrained by the quarry tunnels, the industry moved to the outskirts in the latter part of the century. Nonetheless, to this day the button mushroom is known in French as the 'champignon de Paris'.

Meanwhile, as Paris grew its cemeteries became more and more overcrowded. With so much empty space under the city, and cemeteries threatening the population's health as they burst their bounds above-ground, a solution soon occurred to the authorities... 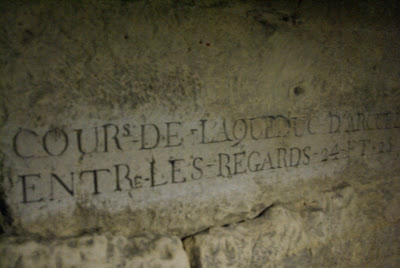