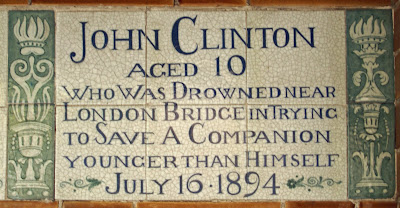 JOHN CLINTON AGED 10 WHO WAS DROWNED NEAR LONDON BRIDGE IN TRYING TO SAVE A COMPANION YOUNGER THAN HIMSELF, JULY 16 1894.
However, a much fuller account of his life is given in a collection of inspirational stories, F J Cross's Beneath the Banner (1895). Supporting details are given in the full version such as dates and addresses, and the author lists his source as the Rev Arthur W Jephson, Vicar of St John's, Walworth. Nonetheless, John's life history involves so many heroic acts in its too-brief ten year span that one's credibility is strained.

Beneath the Banner, which includes the stories of John Clinton and Alice Ayres as well as many better-known heroes, is available as a PDF from Project Gutenberg here.