There were famously strong connections between the hop-growers of Kent and the capital. A London workforce came down to the hop farms at harvest time, picking the crop and offering a noisy disruption to rural life. After being dried in oast houses, many of the hops themselves made their way up to London, an essential raw material for its many breweries. Hops not only give beer its distinctive bitter taste, but also act as a preservative and antibiotic. 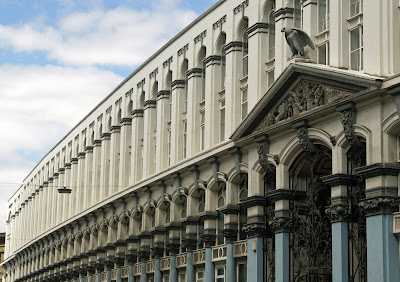 Given its convenient location on the Kent side of London, alongside one of London's oldest railway stations and right by the river and docks, it's unsurprising that Borough was the centre of London's beer industry and a focal point for the nineteenth-century hop trade. The grandest survivor of this period is the huge Hop Exchange, opened in 1868. The Queen's London (1896) described it thus:

The Hall is approached by a short flight of steps and a vestibule with large iron gates. The business of the Exchange is transacted on the ground floor, while all round and in the three galleries are the offices of merchants and others. The gallery railings are emblematic in design and light is admitted through the glass roof. The Exchange is situated in the heart of what may be called the Hop Quarter, and the district abounds in storage accommodation for the fruit. 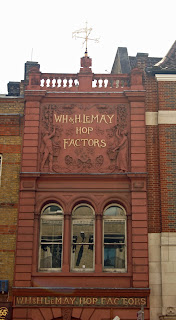 London had many similar exchanges in the nineteenth century for other commodities such as wool and coal, but almost all have disappeared. Even the Hop Exchange has not survived unscathed. Sadly, the top two storeys and glass roof were lost following a fire in 1920; it also suffered bomb damage in World War II. The building now appears to face further risks as it is on the route of a proposed new viaduct and a compulsory purchase order has been issued - although apparently there are no plans to demolish it.

Much smaller in scale, but equally rich in Victorian charm, is the building of W H & H Le May hop factors, on Borough High Street. Like the size and splendour of the Exchange, the exuberant pictorial detail and repetition of the company name bear evidence to Victorian commercial confidence and pride.

However, the hop industry was not immune to wider historical forces. The toll taken on the Borough hop traders - including one Lieutenant Le May - by the First World War is marked in a memorial plaque on the High Street. The remainder of the twentieth century would see a shrinking away of Borough's role in the hop trade, so that these buildings are now reminders of London past. 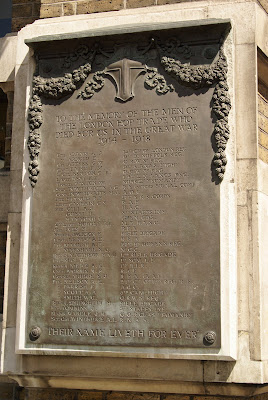 I worked in the Borough for a while and always liked these buildings, especially Le May's, the lettering on which reminds me of Victorian pictorial book covers. Hops were a major part of Southeast London life in those days – both in the sense of people going on hop-picking 'holidays' ('oppin') and in the sense of drinking the end product. I didn't realise they had antibiotic properties, though. I think I feel some sort of infection coming on...

Yes, my chest infection does now feel like a good reason for a beer... although strictly speaking, the main antibiotic effect seems to be during fermentation, helping the yeast act unhindered. However, it would be silly not to give it a try!

Many years ago there used to be a pub under the Hop Exchange called Becky's Dive Bar, presided over by Becky, a beehive hairdo'd harridan whose sausage sandwiches must have caused most of the custom at Guy's A&E on Saturday nights. The carpets were made up of assorted ends of rolls, and that was the saloon bar. I remember them running out of beer one Saturday night and getting a pile of Party 7 tins in. But the place rocked...