Today was Deptford's Christmas Market (it's also on tomorrow), where I made two discoveries. First was the project by Jaine Laine of Ourlaine archival photographic projects - which also attracted the attention of Deptford Dame - to build a photographic archive of Deptford. She has already done similar work in other areas, and is looking for all sorts of photos, old or modern, as well as people's stories and recollections to go with them. The project will be collecting photos at the Albany, 10am-6pm on 21 and 23 January 2009; find more details here. 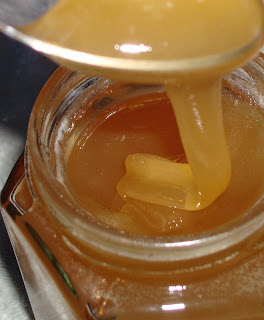 Second discovery was Deptford Creek Honey. I couldn't resist a jar of this (especially as I'm coughing and sneezing and generally living on honey and lemon drinks!). Aptly enough for the area, the label proclaims its international flavour: the bees get to feed on plants originating from around the world as well as the Creek's wetland species such as water mint, water cress and water pepperwort. Sure enough, the flavour of this honey is complex without being heavy: delicious with lemon and hot water. Although I've heard of other urban apiaries, I hadn't come across this one (and it doesn't seem to have a web presence), which made it a very happy find!
- December 06, 2008

tee hee - great minds think alike! I purchased a jar too although I haven't tried it yet. I am very curious to seek out the exact location of the hives!

Me too - but perhaps not for too close a look...