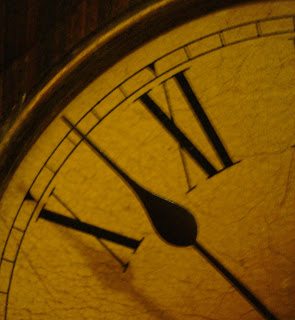 Once a near-forgotten figure from London's past, Ruth Belville has been getting a lot of attention lately following the publication of David Rooney's account of her life. She sold something rather unusual: time.

You're a London clockmaker, your livelihood depends upon having the right time. How do you get it to-the-second exact? With no speaking clock, no radio pips, and the only super-accurate clocks in Greenwich, you had three choices. One was to use your own astronomical observations to calculate the time accurately (fine if you're good at maths and astronomy, can afford an expensive telescope, and have plenty of leisure hours). Another was to travel to Greenwich to check the Royal Observatory's clock yourself (with travel there and back, it's a half day gone - and the astronomers can get a bit grumpy at the interruption). Finally, you could subscribe to Ruth's service and she would visit you every week with her own chronometer, synchronised each Monday morning with the Greenwich clock and correct to within a tenth of a second. Unsurprisingly, the latter was a popular option.

Ruth's father John Henry had set up the service in 1836. He worked at the Observatory, and his boss was keen on the idea because it meant fewer members of the public coming in to look at the clock. After John Henry's death, his widow Maria took over the business but when she retired in 1892 at a mere 80 years old, it was Ruth's turn to become the 'time lady'.

However, things were changing. By the turn of the century, the telegraph system offered an alternative: an electronic time signal sent hourly over the wires. Later, the radio would also offer hourly time checks. It could seem that Ruth's clock-setting days were numbered, but in fact she would only retire in 1940 at the age of 86. How did she keep going so long?

One answer was through publicity. Not intentional publicity, though. In fact, Ruth attracted notoriety through a competitor's vicious slurs: St John Wynne, whose Standard Time Company sought to sell electronic signals, made a speech in 1906 which was reported in the Times. First he attacked her service as quaint in the brave new era of electronic time. As if that wasn't bad enough, he then attacked her personally for using her feminine wiles in her work. Nasty stuff, but luckily it backfired - when the furore died down, Ruth found that the controversy had worked as free advertising and her service was more popular than ever.

Another answer was that Ruth's service was simply better. Her eighteenth-century watch was actually more accurate than Wynne's electronic time signal! For all his modernity, of course, Wynne's days were also numbered - with widespread radio ownership, precise time would become generally accessible.

Ruth's impressively accurate chronometer was the one her parents had used before her. Made by watchmaker John Arnold, it had a silver case: her father had feared the original gold one would be too tempting for thieves as he walked the city streets. After her death it went to the Guild of Clockmakers, and is now on display in their museum.