Mydiddee: from Tahiti to Deptford with Captain Bligh

This post, originally published last December, has been updated with more information about the memorial stone.

A grimy plaque in the grounds of St Paul's Church records one of Deptford's notable visitors. Sadly, Mydiddee - one of the first Tahitians to come to Britain - barely survived long enough to reach dry land, and died within a month of his arrival. As so often for Deptford, Mydiddee's story cannot be disentangled from the history of slavery. 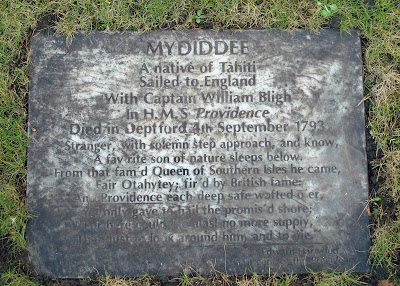 He had travelled from the South Pacific with Captain Bligh, most famous for being subjected to mutiny on the Bounty, his previous ship. Less well-known is that the purpose of Bligh's journey was to obtain breadfruit plants, with the idea that they could be grown in the Caribbean to feed slaves cheaply. At the time, the islands could not produce sufficient food for their inhabitants, and it had to be exported expensively from North America - particularly difficult now the American War of Independence was underway. Bligh returned from the second breadfruit expedition on HMS Providence with the plants, and with Mydiddee.

Bligh was following the example of Captain Cook, who had also brought a Pacific Islander- Omai - to London. He had been feted by society and even met the King and Queen before returning to Tahiti in 1776. Rosemary Hunter suggests that Mydiddee was brought to Britain to act as a cultural ambassador who would return to Tahiti to impart useful knowledge there. A Tahitian chief had asked to make the journey himself but Bligh offered to take his servant Mydiddee instead, seemingly because he was less important and so there would be less trouble should anything go wrong - as of course it did. According to Hunter, Mydiddee died from a misguided attempt to innoculate him against smallpox: in fact, the vaccine infected rather than protected him. He was already seriously ill when the ship reached Jamaica to unload its breadfruit cargo, and Bligh sent him to hospital there. By the time he reached Deptford, his death was imminent.

What did Mydiddee think of England? He had little time to form impressions, especially given his state of health. However, Bligh did record that he was disgusted by the sight of gibbets along the Thames - hardly surprising to the modern reader, since gibbets exhibited the decomposing bodies of executed criminals.

A post mortem examination by a surgeon sent from London by Bligh apparently showed that Mydiddee's lungs were decayed. Indeed that, rather than smallpox, was reported as the cause of death in a contemporary newspaper account:


Yesterday died, at his lodgings at Deptford, the NATIVE OF OTAHEITE, lately arrived in the Providence; he was subject to pulmonary affections, had been frequently ill during the voyage, and twice recovered from imminent death by the unremitting attention of his friends, who were ever ready to contribute whatever had a tendency to promote his health and comfort, particularly his patron, Captain BLIGH. This unfortunate young man was seized shortly after his arrival with internal complaints, and became much better, when a violent recurrence of his symptoms on Friday morning tended to accelerate his dissolution. His native suavity of manners had endeared him to all who knew him, and his death is sincerely lamented by every individual engaged in the expedition, in whose memories he will long exist.

Such apparent rewriting of Mydiddee's medical history is explained by Hunter's argument that Bligh saw the health of those on his ship as a measure of his success. He therefore made efforts to ascribe deaths to causes other than the voyage. Indeed, for the journey between Jamaica and London, Bligh was too preoccupied with his own poor health to pay attention to Mydiddee's. We don't know what the ship's surgeon Edward Harwood thought of the cause of death, but we do know that he wrote the following epitaph, repeated on the memorial:


Stranger, with solemn step approach, and know,
A fav'rite son of nature sleeps below.
From that fam'd Queen of Southern Isles he came,
Fair Otahytey; fir'd by British fame:
And Providence each deep safe wafted o'er,
Yet only gave to hail the promis'd shore;
For here could life alas! no more supply,
Than just to look around him, and to die.

Interestingly, it reflects many of the preoccupations of the era and the voyage (although telling us virtually nothing about Mydiddee himself): the idea of the 'noble savage' or 'son of nature' promoted by Romantics such as Rousseau; British national and naval pride; and the smaller theme of yet again emphasising that it wasn't 'safe' Providence that killed him.

Bligh paid for Mydiddee's funeral and tombstone, but the memorial was never erected. That was finally put right on 2 August 1988 when the current memorial stone was dedicated in St Paul's churchyard by the Bishop of Polynesia, in the presence of Bligh's great-great-great grandson. The project had been led by Timothy John Waters of the Pitcairn Island Study Group and Father Peter Fellows, who quickly raised the £500 for the stone.

Finally, Bligh's own return was little happier. Times had moved on since his departure: there was little interest in his experiences, so his account of the journey went unpublished; the movement for abolition of slavery was underway; and the introduction of breadfruit to Jamaica was initially unsuccessful as slaves refused to eat it. He was known dismissively as 'Breadfruit Bligh' and history would remember only his disastrous earlier journey on the Bounty.

I never noticed the tomb to Mydiddee at St Pauls. It's an interesting comparison with the tomb of Prince Lee Boo at Rotherhithe.
We also tend to forget that Bligh presided over another mutiny when he was governor of New South Wales - the Rum Rebellion. He made the mistake of trying to help poor farmers against the interests of rich traders.
Chris

I've come across Prince Lee Boo's grave online: must make a trip to see it.
Thank you for pointing me to the Rum Rebellion, and it's interesting to see he had a near-mutiny in his convoy on the way over to NSW, too!

Just spent ages reading your posts, how fascinating! I particularly liked this story and your commentary on it. Thanks for your comments on mine, glad you found it informative.

Very interesting - was Mydiddee actually buried in St Pauls, or is that just where the memorial is?

He was actually buried there; the memorial was supposed to be erected after, but for some reason it never happened so the grave was unmarked.

There's also the grave Mahomet Weyonomon - a Native American who died in 1736 - in the grounds of Southwark Cathedral.

I'd never heard of that one, thank you!

Were you aware of Mydiddee's fellow Tahitian who sailed with him on board the HMS Providence?

His fellow countryman was named 'Pappo', a stow-away on board the Providence. However, Pappo when the Providence reached Jamaica stayed there in Jamaica to oversee the transplanting of the Breadfruit plants with Dr. Anderson. Both of these men died at Jamaica, Pappo within one month not unlike Mydiddee there in England.

Maurice Bligh attended the ceremonies for the marking of Mydiddee's grave there along with many others that paid their respects. A nice write-up at the time in the UK papers along with photos.

Thank you for that information: I'd read that there was a stowaway who left the ship in Jamaica but didn't know more than that.

And what a fascinating ancestor to have!

Hello Caroline
I have just completed second draft of a historical novel centred on Pappo, hopefully published this year 2022. Mydiddee's story is there in the chapters on the journey of Pappo from Tahiti to Jamaica.
Regards
MM