I was in Portsmouth yesterday to catch a ferry, but found time to go up the Spinnaker Tower and enjoy the views from 110 metres above the city. Here are a few of the photos.

The Historic Dockyard - HMS Warrior in the foreground, HMS Victory in the middle, and some contemporary warships 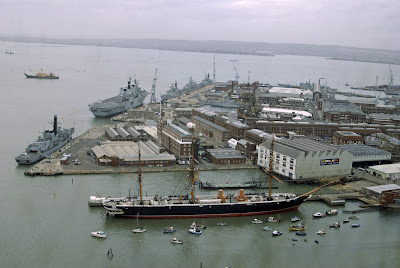 
Spice Island and the harbour entrance 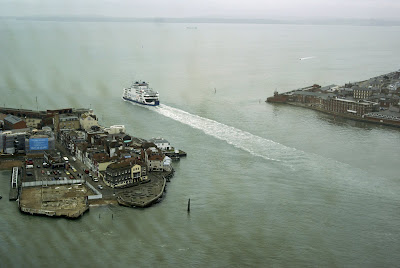 One thing that is clear from these images is the importance of ships to Portsmouth. Its history as a naval base goes back to the Roman period while the royal connection began with King John. The world's first dry dock was built here by Henry VII in 1495. There's also a Deptford connection - both became Royal Dockyards under Henry VIII. Marc Brunel would later work here, designing machines which mechanised block-making (huge numbers of pulley blocks were required for rigging and guns). Today, part of the dockyard remains active but there is also an extensive museum which includes Henry VIII's flagship Mary Rose; HMS Victory, scene of Nelson's death; and Britain's first iron-hulled battleship, HMS Warrior.

I must go and have a look at the dockyards from this viewing point. Before the tower was built, the best view one had of this activity was from the upper decks of ferries on the way to and from Normandy or Brittany.