Many of London’s most famous museums are national or even global in their focus. However, here are some at the other end of the scale: each is dedicated to just one person. 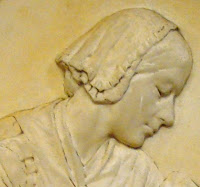 Yes, she was the lady with the lamp – but her work in the Crimea was just a tiny part of her life. It did demonstrate, though, that disease and unhygienic conditions were killing more soldiers than battle: Nightingale did the statistical work to prove it, and then acted on her conclusions. Many of her most important contributions were to nursing education and practise; find out more in this museum within St Thomas’s Hospital (which she helped to design).
Practical info: 2 Lambeth Palace Road, SE1 7EW; open daily 10am-5pm; £5.80.

Sir John Soane's Museum
Eccentric, eclectic, crammed full of the architect's collection of art and antiquities, the museum is less about Soane's life than his vision and taste. He designed this home himself to house his collection, and intended it to serve after his death as a museum for students and others. Every room has its own atmosphere and surprises, and there are knowledgeable staff on hand to tell you more. After experiencing his house, it's hard to imagine Soane being architect to as conservative an institution as the Bank of England!
Practical info: 13 Lincoln's Inn Fields, WC2A 3BP; open Tue-Sat, 10am-5pm; admission free.

Benjamin Franklin House
Franklin combined American politics with scientific achievement. Thus he is remembered as the inventor of the lightning conductor, but also as a signatory of the American Declaration of Independence and Constitution. He was also a printer, and first visited London to learn more about the trade; he later lived in this house for a number of years while serving as representative of Pennsylvania and other American colonies. This was therefore effectively the first American embassy. The museum offers a multimedia tour through the house, exploring his life with film, sound recordings and a costumed guide.
Practical info: 36 Craven Street, WC2N 5NF; open Wed-Sun (book online); admission £7.

Sherlock Holmes Museum
A fictional person still counts, honest! This little museum is great fun: as you wander around Holmes’s Baker Street rooms complete with reminders of his famous cases, it’s easy to forget that the great detective lived only in books. It has an educational element too, highlighting various aspects of Victorian and Edwardian life referred to in the books. I found out such useful facts as just what a gasogen is!
Practical info: 221B Baker Street (of course), NW 1 6XE; open daily 9.30am-6pm; £6.

Apsley House
Rejoicing in the address No. 1 London, this grand mansion on Hyde Park Corner was the home of the Duke of Wellington. As well as his art collection, it houses information on his life and achievements. I was particularly dazzled (literally!) by a huge, ornate silver table centrepiece. Entry is free for Waterloo Day (18 June) each year, and there are usually talks and events all that day too.
Practical info: Hyde Park Corner, W1J 7NT; open Wed-Sun 11am-4pm; £5.40.

Of course, these are just five out of many. Which others would you recommend?
- January 23, 2009

The Sir John Soane Museum is a recent discovery for me. I was rendered speechless (for once) by the collection of Hogarth's in their special room with folding panels.