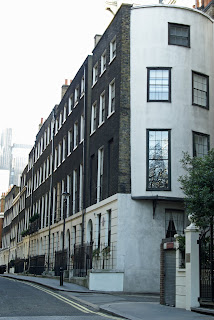 A true gem in the heart of London, this road is just around the corner from Trafalgar Square. Many of its eighteenth-century houses survive: ignore the cars and the intruding modern buildings and you can imagine you've walked back in time.
However, Craven Street was not always so elegant, Until 1730 it was Spur Alley, site of the Salutation Inn. Both name and reputation changed when the Earl of Craven laid out the present housing.

It is full of traces of its famous former residents. Benjamin Franklin lived at 36 Craven Street, now the Benjamin Franklin House museum. His landlady's son-in-law used the house as a school of anatomy: during renovations, a large quantity of bones were found in the garden. Many showed signs of dissectio

n and practice of procedures such as trepanning. Further down the road, there is a literary flavour: plaques record how Herman Melville, author of Moby Dick, and the German poet Heinrich Heine lived here. Grinling Gibbons did too, and Dr Charles West who founded Great Ormond Street Hospital.

Another resident was humorist James Smith, who wrote:

In Craven Street, Strand, ten attorneys find place,
And ten dark coal barges are moor'd at its base;
Fly, Honesty, fly! seek some safer retreat,
For there's craft in the river, and craft in the street.

And it has the ancient and modern blue plaques too...the LCC ones were part of one of the world's oldest plaquing streams, which eventually became English Heritage's blue plaques. Wonderful. :)