Deptford Creek has long formed a boundary between Deptford and Greenwich. In the past, it was a significant physical barrier: the very name 'Deptford' refers to the 'deep ford' there. As recently as the nineteenth century the river slowed down construction of London's first commuter railway (hence Deptford Station opened four years before Greenwich).

In fact, the creek is the mouth of the river Ravensbourne. It is tidal - the picture above was taken at low tide - and navigable. Historically, small shipbuilders and mills were located here, taking advantage of its tidal waters and proximity to the Royal Dockyard. In the nineteenth and early twentieth centuries, it was a popular industrial location, with the power station and various mills enjoying the combination of water for their own needs, easy deliveries by boat, and access to the Thames. Chemical works, verdigris works and soap factories must have made the environment pretty unpleasant.

Today, one cement works remains but the stretch is becoming more artistic than industrial. The Creekside Centre celebrates the creek's wildlife, neighboured by the Laban Centre and various artists' studios and workshops. Other hints of the area's creative life include this survivor from the Deptford X festival, crouching behind a Creekside wall: 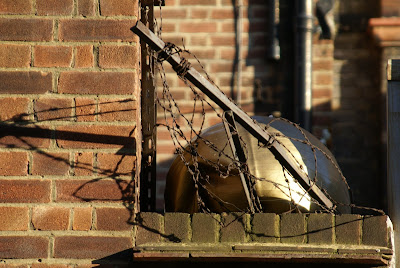 Plus, it took a direct hit from one of Hitler's V2 missiles. Several boats sank, but nobody was killed.

Thank you for that information - and for the link to your map, what a wonderful resource!