Les Ponts Neufs and the perils of old books 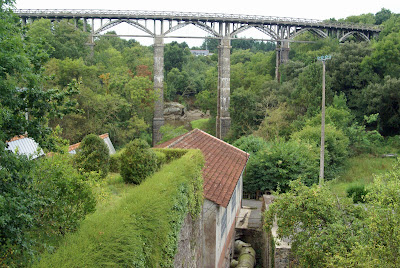 Fond as I am of old guide books, I have to admit that they have their limitations. Inspired by my 1891 guide to Brittany and a couple of vintage postcards, I persuaded my parents this summer that a trip to the scenic spot of Les Ponts Neufs, complete with waterfall and just perfect for picnics, would be a good idea. Better still, the modern guides seem to have missed it so it should be fairly quiet...

Oops. In 1894 Les Ponts Neufs became the location of a small hydro-electric power station complete with barrage-bridge over the waterfall. It's still pretty scenic, but not quite what we expected! The plant supplied nearby Saint Brieuc; it currently houses two turbines installed in 1920, and is apparently still in operation, owned by EDF.

There was also an unexpected bonus: the amazing railway viaduct built by local man Louis Auguste Harel de La Noë between 1913 and 1922. Born in Saint Brieuc, de la Noë studied in Paris before returning to Brittany as chief engineer of roads and bridges for the Côtes du Nord in 1901. He had already won awards for an x-shaped bridge in Le Mans (sadly destroyed in the Second World War) and for his pioneering work in reinforced concrete construction. He would now play a vital role in the building of the region's new railways, impressing with his light and elegant bridges.
Over 237 metres long and 27.6 metres high, the Ponts-Neufs viaduct is impressive even at first glance (I'm afraid the photo doesn't really do it justice). The tall pillars and ornamented spans are more than visually appealing, though: this was among the first reinforced concrete constructions. Building methods including prefabrication and standardised processes were also novel; de la Noë achieved all this despite the interruption of the First World War.

Unfortunately, the pioneering nature of the technology brought its own problems. The sand used included salt; bubbles were not removed by vibration; and the steel was insufficiently protected. Nonetheless, the bridge not only survives but continues to soar over its valley. By contrast, other de la Noë bridges have been demolished, one as recently as 1995: it's hardly surprising that the association Harel de La Noë now seeks to preserve this viaduct and even bring it back into use.
- January 29, 2009

Thanks for doing the history nugget...sorry it's taken me some time to get back to you, but life pretty much blindsided us in early Feb and we're only starting to unravel from that now. The new history nugget will be up on 24th Feb and I hope to be able to keep up with it after that.