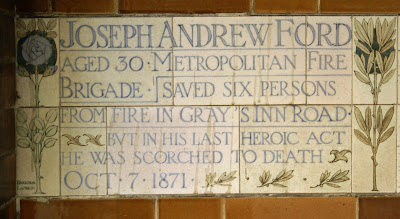 We have already seen that the escape ladders operated by the London Fire Brigade were not infallible: George Lee had died in 1876 when his broke. The main danger was the fire itself, which could spread to the escape and those on it. The issue of how best to make these machines fire-resistant was therefore a crucial one, and had been considered in some detail at the inquest of another fireman, Joseph Andrew Ford, five years earlier.

As his memorial explains,

The inquest evidence established that he fell to his death from the top of the fire ladder after the canvas chute and its wire netting support burned through. The coroner and jury gave most of their attention to the question of whether his death had been a preventable tragedy.

The Society for the Protection of Life from Fire thought that it was. They had always used copper gauze rather than wire mesh: it was more expensive, but they felt that it was also more fire-resistant. A fire-escape manufacturer, Mr Clarke (who had recently lost his contract with the Fire Brigade) suggested that his secret formula for rendering canvas anti-inflammable might have helped too.

Various witnesses from the fire brigade - including its head, Captain Shaw - gave evidence that in fact, the fire escapes were as good as they could be and the higher cost of copper gauze had not been a factor. Rather, the fire officers themselves had decided that they preferred the netting: it was stronger, less likely to crack and get damaged when the escape was moved, and made the escape easier to transport in the wind. As for rendering the canvas uninflammable, alum had been tried but it washed out in the rain.

The jury's verdict was accidental death. However, they were clearly unconvinced by Captain Shaw and his colleagues since they added the rider that