Carrington House, a former lodging house in Deptford, tells us a lot about the problems facing social reformers in London. I've already mentioned it as the residence of murderer Albert Stratton. It was built on Mill Lane (Brookmill Road) to replace an area of slums and lodging-houses, notorious for their use by criminals and prostitutes. Other local residents included itinerant labourers and beggars; as well as crime, overcrowding was a real problem.

Unfortunately, the development of social housing here was hampered by squabbling between official bodies. The London County Council demolished about 50 houses on Mill Lane at the end of the nineteenth century; eight were lodging houses. The law required half of the former residents to be rehoused. How to do that was the topic of protracted arguments between the LCC and Greenwich Board of Works.

Carrington House was the LCC's favoured option, while the local Board of Works preferred small cottages for families. The latter were built alongside the lodging house, and named Sylva Cottages. Both completed in 1903, they certainly offer a contrast in scale: 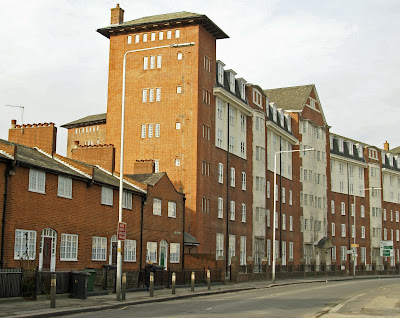 The lodging house was a new departure for the LCC, who had borrowed the idea from six 'Rowton Houses' created by philanthropist Lord Rowton to provide cheap accommodation to working men. The LCC building was named after Lord Carrington, chairman of the LCC's Housing of the Working Classes Committee, and officially opened by the Countess Carrington. Each of the 800 men it could accommodate had their own cubicle to sleep in, and there were also common rooms. Photographs in Harvard University Library show a dining room, reading room and smoking room, all large, tiled spaces with parquet flooring and huge windows, furnished with long tables and benches. The 'lavatory' was a room of bare pipework and rows of washbasins. Despite this careful copying of the Rowton Houses, some early residents soon returned to the nearest Rowton House saying it was 'more homely, more comfortable and warmer'. The LCC's version would never be as popular as the originals.

During the First World War, Carrington House was home to refugees. The British Journal of Nursing reported in 1914 that

A large new establishment for the reception of refugees has just been opened at Carrington House, Deptford, and Miss Ravenor, a sister at Chelsea Infirmary, is acting as Matron. Miss Barton has also supplied nurses. The House can accommodate 800. Nurses engaged in the care of refugees are doing invaluable work at the present time.

By the 1920s, the building was once more a lodging house (the LCC's largest). A contributor to Age Exchange's Library of Experience remembers its residents pouring the contents of their pots over the fascist Moseley and his supporters as they marched down the road before the war. In sad contrast, its inhabitants in 1949 included a number of black seamen who faced a racist mob on 18 July. Carrying knives in self-defence, they rather than their 600 attackers were arrested.

Today, the lodging house has been converted into flats and renamed Mereton Mansions.

Apart from the Italianate style tower on one side it actually looks quite modern. It's quite amusing that should have renamed it a 'mansion' though given its rather interesting past!

Thanks for this - I've often wondered what the history of these buildings was when I've been going past!

What a stunning building, thankyou for that.

Carrington House was quite a problem before they converted it into flats. The residents used to spend the daylight hours lounging against the railings in Deptford Broadway swigging cans of Carlsberg Special Brew and making entertaining remarks to the drivers stuck in the traffic. A friend of mine called them the Deptford School of Philosophy.

Thanks for updating us about this building. I'd often wondered what had happened to it.

Thank you - and ChrisP, thanks for the info on Carrington House's later days! (I suspect many of the residents were always much the same: something of that came across in the 1905 Stratton trial).

And did you know that the railings at the front of the building are re-cycled field stretchers from the 2nd world war? I was a local lad and often walked past.

as a resident of carrington house in the 1940 i have to say the discription given is exactly as it was i was born in a workhouse in daventry then put in childrens homes for 14 yrs i was put out and with no job,money,food,accomodation,i was left to tramp the streets ending up in london. my life has changed completely but i still remember those days i am now 80 yrs old

Thank you for your comment, Dave, and for sharing your experiences. It's interesting that the House was much the same in the 1940s as when it first opened.

As a small child in the 1940s I often passed Carrington House en route to visit my Unt in Bermondsey from where my father originally came, having moved to the more salubrious Bromley in the mid 30s. I was always fascinAted by the variety of men I saw coming out, and pleaded with my father, every time we visited my aunt, that we went past Carrington House. Oh dear, I now feel rather sorry that I was unable to understand the possible plight of these people in what I now know was a very difficult time, and how grateful that my parents were able to better themselves, by their own efforts, I might add, which was the basis for the life I was later able to lead.

I first saw Carrington House as a small child in the 1940s when we would pass it on the way to visit my aunt in Bermondsey where my father had lived until his 20s. By then, in the mid 30s, because of the very hard work of both my (largely uneducated) parents, who had strived to improve themselves, they had been able to move to the more salubrious Bromley. I was fascinated by the men I saw emerging from Carrington House, my father having told me much about its history, and remember trying to attach a history to those I saw. It's really interesting to learn how it has become something rather "posh" these days. My dad would be amazed. He was born in 1895, one of 12 children, living in very poor conditions, and until he was married in 1917 had never slept in a bed.

My Father died in Carrington House in September 13 or 14 1955.
he was a cripple, having little use of his left arm and a limp in his left leg.He was a gambler and a piano player,one handed.My Mother had divorced him .Just another man who slipped through the cracks.I visited the hostel in 1967. A Captain Stevens was in
charge.My Father was buired in Leyisham.

thanks for for all the facts and stories about carrington house, ive been the caretaker at mereton mansions for the past ten years and has been interested in finding out a bit more about the history. all the insides have been modernised now into 72 flats with four new lift towers cctv carpark barriers etc. only thing thats still the same is the outide of the building and the three original towers which are now used as fire escapes, they still have the original windows and the metal handrails going down the stairs and some of the old tiles on the walls. not sure how true it is, but i heard there were three floors below ground level which was used as an infirmary but have now been filled in.

Thanks for the information on Carrington House, an interesting history on the building.
I am interested in the comment made by Dave Wright - so good that he came through living there.
I have been trying to find out more about a relative who cut himself off from his family. His name was Wilfred Griffiths and I recently discovered he had lived at Carrington House up until his death in 1988. Does anyone know if records exist of those who lived at Carrington or did you know him Dave? He had been in the RAF and then the NZRAF as a wireless operator. How or why he ended up there is a mystery.

I left a comment in 2015 about my Father had died in Carrington House in September
of 1955. His name was Terry Walker. I visited Deptford,from Canada, in Summer of 2016 and found his grave at Grove Park Cemetry in Lewisham. This cemetry was used in the 1950s for the unclaimed. Matt

Matthew, thank you for your comments and I'm glad you were able to find the grave.