A most endearing child 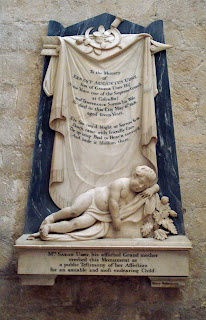 This memorial in Chichester Cathedral is a touching contradiction of the idea that in days of high child mortality, people were less affected by the death of young children. Instead, it shows the impact of one child's death upon a whole family.
Ernest Augustus Udny was the son of George, 'Some Years one of the Supreme Council at Calcutta', and Temperance Sophia. He was only seven years old when he died in 1808. However, perhaps because George and Temperance were in India, the memorial was actually erected by 'his afflicted Grand mother ... as a public Testimony of her Affection for an amiable and most endearing Child'.

The epitaph perhaps does not coincide with modern sentiments, suggesting as it does that his early death was in some ways a blessing:

E're Sin could blight or Sorrow fade
Death came with friendly Care
The op'ning Bud to Heav'n conveyed
And bade it blossom there.

Sure enough, the memorial is topped with a sickle which has harvested a rosebud.