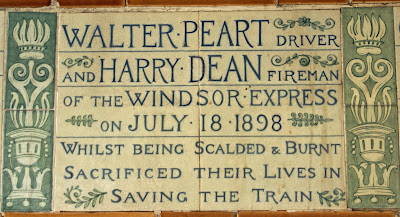 Walter Peart and Henry Dean were the driver and stoker of the Great Western train known as the Windsor Express. On 18 July 1898, they were driving the 4.15 train from Windsor to Paddington on what seemed a routine trip when, just outside Acton, the connecting rod broke. Part of it was driven through the boiler casing and caused damage to the fire box which overwhelmed the men with cinders, steam and fire. Nonetheless, they succeeded in applying the brake and bringing the train to a safe standstill before leaving the engine at Acton Station.
At hospital, Peart explained why he hadn't jumped out:

WALTER PEART DRIVER AND HARRY DEAN FIREMAN OF THE WINDSOR EXPRESS ON JULY 18 1898 WHILST BEING SCALDED & BURNT SACRIFICED THEIR LIVES IN SAVING THE TRAIN.

Amazing what people will do in times of crisis. Brave men.

Yes, it's very unpleasant and very impressive at the same time - like so many of the Postman's Park stories.

Walter Peart was my great great grandfather. Thank you for allowing me to see a picture of his memorial. We may now visit it ourselves.

I have visited Postman's Park many times to view this memorial and have always been impressed by the way it and the others are maintained.

I am grateful to you for recording it in your blog. People like he and Henry Dean should not be forgotten.

Indeed. I see you share a surname - are you a descendant?

I've just listened to the story on BBC radio 4extra, well worth a listen on iplayer and they mentioned postmans park so i'm very grateful to see your picture of the plaque. Mike Griffiths