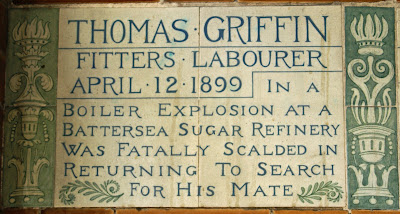 Garton Hill & Co were sugar refiners who had moved production from Southampton to Battersea in 1882. Their products included a specialist brewing sugar, Garton's Saccharum, described as fully inverted, free from impurities, and able to 'brew Beer surpassing even Burton Ales in brightness and endurance'. The company would continue (later under the name Manbre & Garton) until taken over by Tate & Lyle in 1976.
In 1899, 21-year-old labourer Thomas Griffin suffered a fatal accident at the refinery. He was working in the hydraulic room when he heard an explosion. It came from a room where his colleague F Briggs worked, and he rushed into the steam shouting 'my mate, my mate'. When he emerged a few minutes later, he was terribly scalded and soon died from his injuries. Awfully, his death was in vain: Briggs had already escaped unhurt.

Well he certainly came to a sticky end...

Where did you get your information surrounding the circumstances of his death?

From contemporary newspaper reports; unfortunately I don't have the references to hand, but from memory it was reported in the local newspaper.