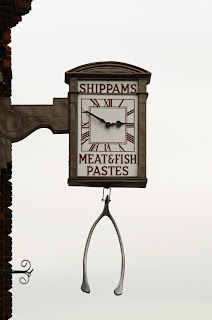 Email ThisBlogThis!Share to TwitterShare to FacebookShare to Pinterest
Labels: chichester, food and drink

My great grandparents William & Alice Butler used to live at 5 East Walls, this was before it became Shippams Social Club and I believe he used to own a large orchard there as well. There was a picture of one of his daughters in the Chichester Observer many years ago selling apples in the archway. They had 9 children as per the 1911 census.

I worked for Shippams many years ago it was a great place to work have lots of memories.
The social club could tell some stories and my engagement to my first wife was in the club after a cheap drink night playing darts with Mr. Shippams ( we all called him that in or out of work ).

The old building was amazing so many places to hide and as you walked through the building
each area would have different smells from cooking if you timed it right just after steamers had been opened it was bacon for breakfast or grab a piece of chicken to dip in the sauce .....