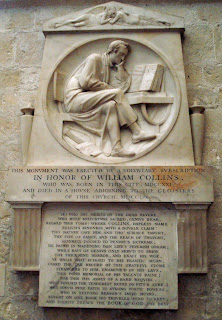 William Collins was born in 1721, the son of a Chichester hatter and former Mayor. He enjoyed a privileged education at Winchester School and Oxford University, as well as private means and an inheritance of £2,000 from an uncle. Many of his friends were literary, including Dr Johnson. Not needing to earn a living, he decided to become a poet.
Unfortunately, Collins's blessings brought their own problems. He was apparently weak-willed and indolent, better at planning than at carrying his plans into effect. A number of projects were proposed or even begun, but left abandoned. This wasted promise was accompanied by a decline into poor physical and mental health, as well as financial problems. At the young age of 38, he died insane in Chichester.

Nonetheless, Collins is recognised as a good poet in his genre and a significant figure in the shift from Augustan to romantic poetry. Tributes to him were mixed: Samuel Johnson wrote that

the grandeur of wildness, and the novelty of extravagance, were always desired by him, but were not always attained... his poems are the productions of a mind not deficient in fire, nor unfurnished with knowledge either of books or life, but somewhat obstructed in its progress, by deviation in quest of mistaken beauties.'

His varied legacy is aptly summed up by the memorial in Chichester Cathedral. It alludes to an anecdote from Johnson: that when he visited him during a lucid period, Collins told him that he travelled only with a bible. "I have but one book," says Collins, "but that is the best."

Yet who the merits of the dead revere,
Who hold misfortune sacred, genius dear,
Regard this tomb! Where COLLINS, hapless name
Solicits kindness with a double claim:
Tho nature gave him, and tho' science taught,
The fire of fancy, and the reach of thought,
Severely doom'd to penury's extreme,
He pass'd in madd'ning pain life's feverish dream;
While rays of genius only serv'd to shew
The thickening horror, and exalt his woe.
Ye walls that echoed to his frantic moan,
Guard the due record of this faithful stone!
Strangers to him, enamour'd of his lays,
This fond memorial of his talents raise;
For this the ashes of a bard require,
Who touched the tenderest notes of pity's lyre:
Who join'd pure faith to strong poetic powers,
Who in reviving reason's lucid hours,
Sought on one book his troubled mind to rest,
And rightly deem'd the Book of God the best.