Back in 1954, south-east Londoners had quite a choice of days out by bus. From as little as four shillings, London Transport would take them (and one child under 3 at no extra cost) to a selection of destinations. Windsor and Hampton Court are still attracting visitors today, as is Whipsnade Zoo in Bedfordshire. Richmond is another pleasant destination of course, although we'd probably tend to go by tube or train rather than special bus trip. 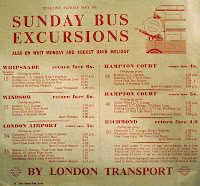 What really stands out is London Airport - now better known as Heathrow. Many of us find flying from there enough to discourage returning for a day trip! Even the little-known but rather nice Visitor Centre closed a few years ago, and the 'small exhibition' at Heathrow Academy doesn't seem a proper replacement.

However, things were very different in the 1950s. Civil flights from the airport had only begun in 1946; before that, Croydon Airport had been used. The first slab of the current runway was ceremonially laid by the Queen in 1953, and the first permanent terminal building was still a year away, so London Airport was an exciting, forward-looking place of interest even to those who couldn't afford to fly from it. Add to that the joys of plane-spotting (admission to visitor enclosure, 6d), or even pleasure flights and conducted tours of the airport, and it's no wonder that the destination seems to have been a popular one. Indeed, the Ward Lock guide to London agreed that 'the excursion is well worth making'.

Even the bus departure points remind us of a past era. Lewisham passengers could board from Botti's Cafe, Rennell Street - there's still a bus stop, but the cafe is gone. The Deptford Broadway stop was outside Seager's, a now-closed distillery being replaced by high-rise flats. Holland Gin had been distilled here since the nineteenth century, although the use of the site as a distillery probably pre-dates that. Seager's Gin took over the premises in 1922, but closed in the 1950s and the site was for many years an industrial estate. Like much of that part of Deptford, it is now in the throes of redevelopment - presumably the plans don't include a coach stop for daytrippers!