Today is the very first Ada Lovelace Day, an international day of blogging on women in technology. Ada Lovelace herself was taught mathematics by Mary Somerville, who introduced her to Charles Babbage. They corresponded about his Analytical Engine and Lovelace went on to publish her own notes about the early computer: one section was in fact the world's first computer programme. Lovelace died in 1852, aged only 36.* 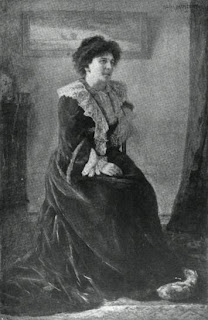 Among her many successors was Hertha Marks Ayrton, who excelled in electrical engineering and was also a suffragette. Born in Portsmouth in 1854 to a poor Jewish family, she was encouraged by feminist campaigner Barbara Bodichon to study mathematics at Girton College, Cambridge. Ayrton didn't receive a degree because Cambridge University wouldn't award them to women until 1948, a quarter-century after her death.

Nonetheless, she did achieve a BSc, by studying in London. After her marriage to physicist William Ayrton she worked with him on electricity. Her speciality was arc lamps and she made significant improvements to their technology, as well as inventing the Ayrton Fan for dispersing poison gases, used in the trenches of the Great War. Ayrton also devised and solved mathematical problems, and invented a draftsman's device for dividing lines into equal parts.

Ayrton's notable firsts included being the first woman member of the Institute of Electrical Engineers and the first woman to read a paper in person to the Royal Society. She succeeded in combining all this scientific work with an active role in the suffragette movement and with motherhood - her daughter was named Barbara Bodichon Ayrton after Hertha's first mentor.