Deptford from the Thames

The Thames Clipper allows Londoners to combine commuting with sightseeing, and is a great way to see Deptford's riverfront.

Convoys Wharf was built on the site of a former cattle market, to receive shipments of newspaper; it is now used by News International for storage. There are plans to redevelop the site with a mix of residential, retail and business premises. Olympia Warehouse, a cast-iron building erected in 1846, is to become an arts centre. The inclusion of three high-rise buildings has been particularly controversial. However, nothing has happened as yet.

Paynes and Borthwick Wharves have been torn down, except for the Paynes Wharf facade, but the development is in a similar state of limbo, leaving this stretch of riverfront looking desolate. Again, though, the development plans are for high-rise buildings.

This little area of Thames waterfront may not be as photogenic as Greenwich, but it is rich in history: here was the first Royal Dockyard, the first large-scale power station, a huge cattle market, a hospital for tropical diseases, a place frequented by royals, privateers, foreign visitors and the poorest dock workers. Their traces are visible but often precarious. Well worth taking the Clipper for a view from the water! 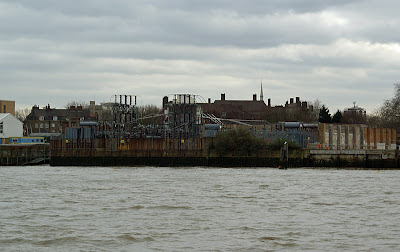 News International quietly sold out to Huchison Whampoa in June 2008.

There were no specific plans in the Richard Rogers Partnership application for the listed Olympia building, merely a suggestion that it might be an arts centre.

You also get a fleeting view of the Master Shipwright's house, which was built in 1708 and is one of the few bits of the royal docks that remain. It's not often visible from the land, being hidden behind a high wall at the bottom end of Watergate Street, but from the water you get the chance to spot it, tucked between Convoys and Paynes & Borthwick wharves.

Thank you for that info, Bill. The lack of specific plans does explain why some sources refer to it as a potential concert hall.

Dame, thank you - I forgot that, although it does actually appear on some of my other photos. Perhaps I'll give it a post of its own!