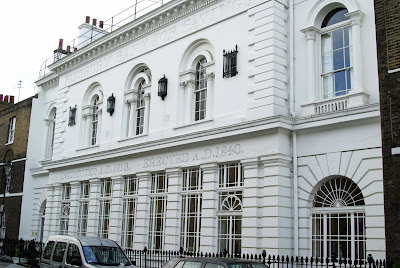 This amazing building is the former premises of the Finsbury Bank for Savings, on Sekforde Street, Clerkenwell. What's perhaps most surprising is how un-banklike it looks: there's little sense of traditional solidity and physical security here. Nonetheless, it was able to attract customers including Charles Dickens.
The architect was Alfred Bartholomew (1801-1845), a watchmaker's son who apparently excelled more at writing than at architecture (he became editor of The Builder, while his Specifications for Practical Architecture ran to at least four editions). Indeed, the Biographical Dictionary of British Architects described this bank as 'his only architectural work of importance'. It is certainly an original legacy, an eye-catching addition to its quiet side street.

As for the daily life of the bank itself, we can learn something from an Old Bailey trial of 1845. William Coleman Balls was convicted of forgery with intention to defraud, and transported for 10 years. He had been secretary to the United Brothers' Provident Society, a club of about twenty members who paid regular contributions, and in return received payments when they were sick. As secretary, he had access to both its minute-book and its bank book, and managed to fraudulently withdraw £30 from their account.

At Balls's trial, the bank's procedure was described in detail: first, the Society would have to send a notice of withdrawal, and the bank would take a week to make the necessary entries in the depositors' book. Then, three trustees of the Society would have to be present in the bank and sign their names as directed by an actuary and a clerk; they would then produce the depositors' book to a manager who would also check their signatures against the Society minute-book. Only after these procedures would they be given a cheque by that manager; and finally, the cheque would be taken to a manager of the pay department, who would give them the amount in gold.

Unfortunately, the rather cumbersome procedure had not proved secure; it relied heavily upon checking the withdrawal against the minute book and upon 'the bona fide nature of the transaction'. Nonetheless, we should perhaps be grateful to the dishonest Balls for allowing us a glimpse into the world of Victorian banks and their customers.

I just walked past this building on my way to work and I think it does look like a bank. I am delighted it is so well kept. We must keep such gemsd of architecture in good nick.

I used to work in this building in the 1960s when it was the trustee savings bank punch card unit.
it is interesting to see it now, it looks very well kept

Knight Frank has it listed as a residence. Lots of pictures and a floorplan!