Myddelton and the New River 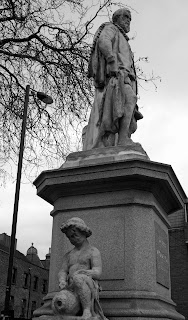 This statue, gazing out from the southern tip of Islington Green, commemmorates London Welshman and water entrepreneur Sir Hugh Myddelton (1560-1631). His greatest achievement was the New River, literally a new river (or canal) for London.
Although from a privileged background - his father was governor of Denbigh Castle and an MP - Hugh was the sixth son, so was apprenticed to a goldsmith. Honours followed: he became Royal Jeweller to James I, alderman, Recorder of Denbigh, and eventually its MP. In 1622 he was made a baronet. According to tradition, he smoked tobacco with his friend Sir Walter Raleigh, thus helping to promote the habit.

Myddelton's success was not only political but also financial. He was a successful merchant, a banker, and invested in Welsh lead and silver mines. His great achievement, the New River, was to be a source of clean water for the city: a healthful alternative to the Thames, which doubled as drinking source and sewer. The scheme had already been begun by Edmund Colthurst, but he had been left without funds when the City's Court of Aldermen lost their nerve and refused further funding. Believing in the importance of a pure water supply for London, Myddelton took on the project of providing it - but he soon ran into similar problems and construction was halted. Undaunted, Myddelton persuaded the King to fund half of the cost; much of the rest came from 29 'adventurers' who bought shares in the New River Company. On 1 December 1613, the first of the water flowed through 42 miles of canal from Amwell Springs, Hertfordshire to a point near Sadler's Wells in Islington. Present at the ceremony was Hugh's brother Thomas, the Lord Mayor elect.

Ten feet wide and four deep, taking a circuitous route along the 100-metre contour line so that the water flowed by gravity with a drop of less than six inches in each mile, and passing over valleys in lead-lined wooden aqueducts, the New River was an impressive engineering achievement. As a business, it was less successful: problems included the appeasement of landowners who feared it would flood and ruin their land; leaks which wasted about a quarter of the water; vandalism (the wooden mains were often above ground); intermittent supply (as little as two days a week in the early years); fish in the pipes due to lack of filtering; and an initial lack of customers willing to pay for the water. Investors would have to wait 20 years to see any profit, by which time Myddelton himself was dead. Nonetheless, despite this slow start, the New River Company was a powerful financial force in London by the end of the seventeenth century. Among those benefitting from the company's success were the Goldsmith's Company to whom Myddelton had left a share for the needy, 'especially to such as should be of his name, kindred and country'.

Only as recently as 1904 was the New River Company's water supply business taken over by the Metropolitan Water Board. The river no longer follows its original course in London, but the northern part still brings water to the Stoke Newington reservoir.