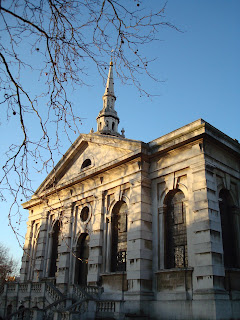 In 1836, the issue of Church of England income was receiving a great deal of attention. Much of this debate was triggered by non-conformists, understandably unhappy at having to pay various taxes to the established church.

On the national level, there was reform to the tithe system which had required one-tenth of the produce of land to be paid to the church. The Tithe Commutation Act allowed tithes to take the form of a fixed monetary payment; maps and assessments of lands subject to tithes were produced and remain important historical sources.

Church rates were another controversial area. Parishioners had to pay these for the upkeep and maintenance of the church; the rate was set by the churchwardens and had to be paid by occupiers of land or houses in the parish. In St Paul's, Deptford that year, there was a very public dispute over the level of the rates. It was particularly galling to non-conformists to have to pay towards items for St Paul's which their own chapels disapproved of or rejected. Thus when Lieutenant Roberts (a member of the local gentry and naval officer living in the High Street) claimed 'I contend that the expenses objected to are Essentials', an anonymous author was provoked to publish a poetic riposte:

We would gladly relieve
Those who do not believe
The doctrines we preach,
Or the forms that we teach
From all charges which are not prudential;
But ours I contend
(Tho' for them we expend
Three-hundred a year,)
And will make it appear
To RELIGION are highly essential.

The beadle's (don't laugh)
Lac'd coat, hat and staff,
Keep naughty boys quiet
Who in church-time would riot,
And they give him a look potential
To frighten the poor,
As from door to door
We insist on the rate
For our CHURCH of STATE:
Are not those to RELIGION essential?

Stop the coaches and four?
What becomes of the poor?
Drink no vestry wine?
Our church must decline;
Then will flow fast your tears penitential:
If no banner wave,
Not a soul shall we save,
None would come to our fold
But for books bound in gold:
You must own then that these are essential.

This church was long reared
E're an organ appeared;
For eighty years more,
No lights passed that door;
RELIGION had then no credentials,
But since we've had fine
Flags, music and wine,
Cock'd hats, lace and coaches,
She boldly approaches,
For all these are OUR CHURCH'S essentials.

Only in 1868 were non-conformists' grievances properly addressed, when the Compulsory Church Rates Abolition Act made the rates voluntary.
- March 27, 2009