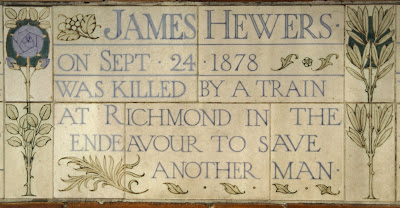 When James Hewers saw a young man fall in front of a train, he attempted to rescue him but thereby himself in its path and was killed.

Frederick Alfred Croft, an Inspector on the South Eastern Railway, died in similar circumstances. On 11 January, he was on duty at Woolwich Station; among those waiting for a train were officers in charge of a woman being taken to Barming Lunatic Asylum. As their train arrived, the woman broke free and jumped in front of it. Croft managed to drag her out of the path of the train, but at the cost of his own life. 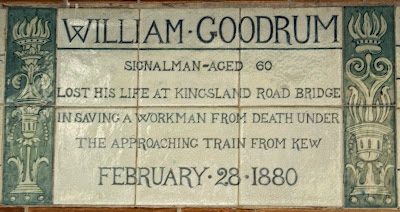 Meanwhile, the roads posed particular dangers to the young. The Watts Memorial commemorates two such cases. First, William Fisher was walking on Rodney Road with his two-year-old brother. When the toddler ran into the street in front of a horse and van, William rushed after him and pulled him to safety but was killed himself.

Similarly, fifteen years later, Soloman Galaman was out with his four-year-old brother. As they crossed Commercial Street, the little boy slipped over. Saving his brother from being run over, Soloman was killed. His last words perfectly fit the Victorian mood of the memorial: 'Mother, I saved him but I could not save myself.'