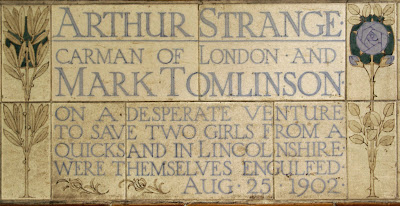 Arthur Strange was employed as a carman (delivery driver) by Whiteley’s in London, one of 6,000 employes of the department store which offered a delivery service up to 25 miles. Mark Tomlinson was an assistant at Nottingham City Asylum. However, both had connections to Kirton Holme in Lincolnshire: Tomlinson had been born there, and his family still lived there. His cousin Ida Mumford (herself a Londoner) was engaged to Strange.

ARTHUR STRANGE, CARMAN OF LONDON, AND MARK TOMLINSON, ON A DESPERATE VENTURE TO SAVE TWO GIRLS FROM A QUICKSAND IN LINCOLNSHIRE WERE THEMSELVES ENGULFTED, AUG 25 1902.

Funny how many of these are heroic failures.

This death is my absolute worse nightmare!

Caroline - I'm confused. Have you got your Lincs and Lancs muddled up? Or maybe I've got my anorak on the wrong way round, which is quite possible, but I think all these places are in Lincolnshire, near Boston and the Wash.

Agh, proof of the impossibility of proof-reading one's own work! You are of course right, this all happened in Lincolnshire (as I even managed to transcribe from the plaque without noticing the error above it). Corrected now, thank you for spotting this!

Adam, I've been struck by the same thing - a huge proportion of these memorials are to people who were dragged under by the drowning person they went to rescue, overcome when searching for people who'd already escaped, etc. I'm not sure whether this indicates a particular affection for those who died nobly but in vain, or just a low success rate for attempted rescues. Presumably the requirement that the rescuer died didn't help.