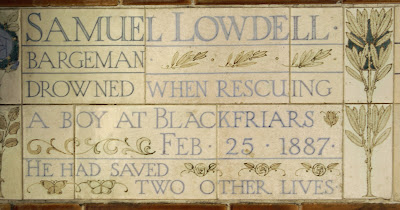 Lowdell was a 24-year-old bargeman who lived in Bow Common. (Bargemen carried goods on the river, while watermen carried people.) He worked on a barge called the William and Mary, and jumped off it to rescue a boy who had fallen into the river. However, although he was a good swimmer, he was never seen alive again.

His body was found by James Law at Battle Bridge Stairs, near London Bridge. Law, a waterman, spotted his body in the water and towed it ashore. The body was identified as Lowdell, a man who had saved several other people from drowning in the past. The state of the body was described at the inquest: tattoos on the arms, a broken nose caused after death, and the trousers down below the knees. However, nothing more seems to have been said about the strange state of his dress.

SAMUEL LOWDELL, BARGEMAN, DROWNED WHEN RESCUING A BOY AT BLACKFRIARS FEB 25 1887. HE HAD SAVED TWO OTHER LIVES.

Love this place - can't get enough of it!