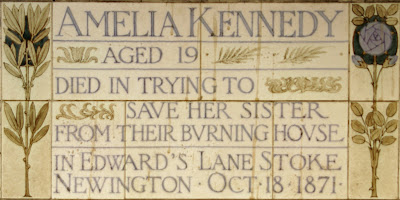 Mr and Mrs Kennedy had a laundry at Edward's Lane, Stoke Newington Church Street. They and their children lived on the premises, made up of two small houses. At about 3.30 one morning, a fire began and was spotted by the police who gave the alarm to the occupants. Amelia, at 19 perhaps the oldest of the children, went through the passage joining the two houses to wake her brothers before returning to wake her sister. However, she was overcome and died in the house; meanwhile, her sister escaped. The cause of the fire was unknown and the premises uninsured.

At the inquest, it emerged that the fire engines only began fighting the fire 40 minutes after the police originally gave the alarm. The reasons were apparently that first, horses had to be obtained and second, the water plugs in the road were blocked. They had been choked with granite when the road was repaved. The inquest verdict included a recommendation that the horses should be kept at the fire station and the plugs constantly visited to ensure they were in working order.

AMELIA KENNEDY AGED 19 DIED IN TRYING TO SAVE HER SISTER FROM THEIR BURNING HOUSE IN EDWARD'S LANE STOKE NEWINGTON, OCT 18 1871

The instinct to save children from house fires seems to have been as strong as it was dangerous. We have already seen Alice Ayres die saving her nieces and nephews, while Ellen Donovan perished attempting to save a neighbour's children. Four other deaths recorded in Postman's Park followed a similar pattern:

When Alice Maud Denman's house in Hackney Road set on fire, her six children were sleeping inside. She and Arthur Regelous tried to rescue them, but both adults and four of the children died. Only two children survived the blaze.

ARTHUR REGELOUS, CARMAN ("LITTLE PETER") AGED 25 WHO WITH ALICE MAUD DENMAN, AGED 27, DIED IN TRYING TO SAVE HER CHILDREN FROM A BURNING HOUSE IN BETHNAL GREEN, APRIL 20 1902.

Elizabeth Coughlam knocked over a paraffin lamp, which set her clothes alight. Afraid that they would set the house on fire and menace her two children who were asleep upstairs, she hurried outside with clothes and lamp blazing. Her efforts succeeded, but at a terrible cost: despite the attempts of neighbours to save her, she died in hospital that day from her injuries.

Finally, eight-year-old Henry Bristow was a cabinet-maker's son who lived in Walthamstow. When his mother left the house on an errand, she put Henry in charge of his three-year-old sister. The little girl knocked over a paraffin lamp, setting her clothes on fire. Henry tore them off, but his own clothes caught alight in the process. He was seriously injured and died from his injuries in hospital. More happily, his little sister made a complete recovery.

Finally one at the end that was a successful attempt at saving a life! How terrible though that he should have been left alone to look after his sister, but this was probably normal for the times.

Yes, that's as close to a happy ending as we get in Postman's Park! It does seem to have been normal: several of the other plaques relate to events where children were caring for even younger siblings.

I'm a distant relative of Alice Denman, from Scotland. Will be in London soon so will try to find the memorial. Thanks for sharing.