Wrestling for a Poultry Pun 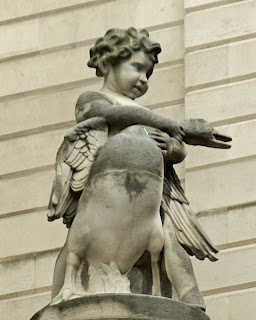 This boy wrestling a goose above the Midland Bank headquarters is a visual representation of the street below, Poultry. The road may be dominated by financial institutions today, but its name harks back to the days when it was home to poulterers - as well as a large number of taverns, and even a notoriously dirty, malodorous prison.

The pair were designed by Edwin Lutyens, sculpted by William Reid Dick, and appeared in 1936. The goose hasn't been subdued yet!

William Reid Dick was born in Glasgow, so it's appropriate that a version of this sculpture is now in the Kelvingrove Art Gallery. At the time he undertook the commission, Dick was president of the Royal Society of British Sculptors, trustee of the Tate Gallery, and a Royal Academician. He had been knighted the previous year, and would go on to become Sculptor in Ordinary for Scotland. As well as his public sculpture, he was renowned for his portrait work, some of which is now in the National Portrait Gallery collection.

I've often thought it a shame that we no longer put sculptures on buildings. Imagine how many people must have been employed in the profession in the 19th century!