Before 43AD, there were settlements on the site of modern London but little to indicate that the area was of any particular importance. Even the first Roman settlement was just a trading post with buildings of wood and mud. However, after the queen of the Iceni tribe, Boudicca, rebelled and razed it to the ground, the Romans rebuilt in stone complete with defensive wall and substantial public buildings. Among their greatest innovations was the first London Bridge, located very close to its modern successor. They were here for 350 years, from around 50-400AD, and made Londinium their largest British city.
Want to explore Londinium? Here are three places to begin: 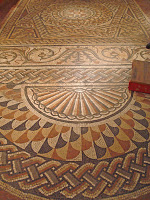 The Roman gallery at the Museum of London is full of incredible artefacts - a beheaded skull, probably belonging to one of Boudica's victims; a pot of face cream, contents intact - but the Bucklersbury Mosaic is a definite highlight. This mosaic floor was found in 1869 in the heart of the City, and was relaid first in the Guildhall Museum and then in the Museum of London where it now appears as the floor of a recreated dining room.

It's not only the quality of the mosaic itself which demonstrates that it belonged to a wealthy household. When it was discovered, the remains of a hypocaust (under-floor heating) system were found underneath.

This site is actually in a rather sorry state at present. Construction work is going on around it, the City's signposts appear to have forgotten it, and the area is obviously used at night for drinking and urinating. Happily, when work is complete the temple should be given its own exhibition space in its original location.

In the meantime, if you can bear the less-than-attractive surroundings, you'll be rewarded with the remains of a Roman Mithraic temple. Like the Bucklersbury mosaic found nearby, the temple is not actually in its original location: the remains were uncovered 18 feet below the current road level and moved so that the now-defunct Bucklersbury House could be built.

Mithraism was a popular cult among Roman soldiers, but closed to women. This temple was built in the mid-third century, on the banks of the river Walbrook, and would have been partly underground to represent the cave of Mithras. Inside was a relief of the tauroctony: the killing by Mithras of a bull. Initiates to the religion rose through a series of grades, beginning as a 'raven' and ending as a 'father'.

Guildhall amphitheatre
Wander through the Victorian art in the Guildhall Art Gallery, take the modern lift to the lowest floor, and emerge into Roman London. Here are the remains of Londinium's amphitheatre, and although they might not make much sense on their own there are enough descriptive texts and images (not to mention sound effects) to bring the stones to life. They were discovered in 1988, and integrated into the new art gallery where they dried out in a controlled environment before going on public display. Don't miss the wooden drainage pipes!

Entertainments would have included fights between gladiators. However, contrary to popular belief, few would have died here: training a gladiator was an expensive business, so they were not sacrificed lightly. Condemned criminals, on the other hand, were expendable and would have to face wild animals or armed men. Once the Romans left, though, the amphitheatre was abandoned and lay derelict until it was built over in the eleventh century. It would have to wait 900 years to come to light again.

Also worth a look: the statue of Boudicca by Westminster Bridge is not Roman but does commemorate one of the most significant events in Londinium. London Stone, opposite Cannon Street Station, was probably a Roman milestone (and was originally much taller than it is now).

I used to live on Bucklersbury, a street in Hitchin. I don't suppose the two are related, are they?

Ooh, I don't know. I'm away from my London place names book this week, but will have to look it up when I get home.