3 highlights of Tudor and Elizabethan London

The Tudors came to power in 1485 when Henry VII became King; their rule came to an end in 1603 when James VI of Scotland succeeded Elizabeth I. Henry VIII is currently getting all the popular attention, and his dissolution of the monasteries certainly drastically changed London's religious and physical landscape. London's execution sites were kept busy during the following years of religious strife but life finally settled down again under Elizabeth I. Business and culture both thrived: the Royal Exchange was founded in 1560 and the Globe Theatre was built in 1599.
Staples Inn

These half-timbered, higgledy-piggledy shopfronts make a distinctive landmark on High Holborn. You can walk through to a quiet little courtyard; the Hall, not generally open to the public, was restored after being badly damaged by a World War II bomb. Back out on the main road, it's rather nice that one of the shops here is a tobacconist: smoking was very much an Elizabethan innovation. Although tobacco was probably known in Britain through Spanish imports before Sir Walter Raleigh brought some back, he was certainly chief among those who popularised it. 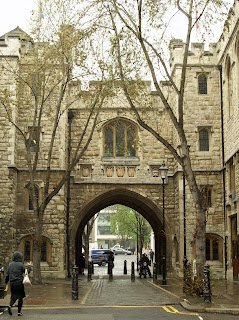 When it was built in 1504, this was the main gate to the wealthy and influential Priory of the Knights of St John. However, the remainder of the Tudor period would prove turbulent for the institution: first it was disestablished by Henry VIII, then re-established with only a small part of its lands by Mary (the original document is on display in the museum), before being disestablished once more by Elizabeth I. The gatehouse would play another significant role in the life of the period: as the office of Master of the Revels, it received about 20 visits from William Shakespeare when his plays were performed before this Elizabethan censor.

The Gate also served as a coffeehouse, the base of the Gentleman's Magazine, a home, and a pub serving the local Victorian rookeries before the Order of St John was re-established in 1880 under the Queen's patronage and repurchased the building. Today, it houses a small museum about the charity, which is responsible for both St John's Ambulance and the St John Ophthalmic Hospital in Jerusalem. However, you should try to join one of the regular guided tours which allow you to visit other parts of the gatehouse as well as the Order's church, not normally open to the public. 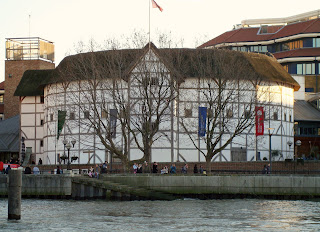 It's well known that few Tudor or Elizabethan buildings survived the Great Fire of London, but the Globe Theatre actually burned down even earlier, in 1613. However, a replica has been built a short distance from the original site in Southwark, an area then full of amusements including bear baiting and taverns. Being outside the city limits, it was less tightly controlled, hence its appeal to those seeking and providing entertainment.

There are two ways to experience the theatre. First, you can look round the visitor centre; your visit includes a guided tour of the theatre itself as well as exhibits such as musical instruments of the period. Second, to immerse yourself more fully in the atmosphere, attend a play. You can either be a 'groundling' stood in the central yard (bring a raincoat), or buy yourself a seat in the galleries (bring a cushion!).

Also worth seeing: Henry VII's chapel in Westminster Abbey; the Inns of Court (much restored, especially after being extensively bombed in World War II); Greenwich Park - Henry VIII's beloved palace is long gone but the area is still beautiful; Eltham Palace, again: it was Henry VIII's boyhood home; Lambeth Palace (not generally open to the public but look out for guided tours).

I love the St.John's Gate, passing through it many times to go to an office in Clerkenwell. And coming back through it to go to the Jerusalem Tavern- always worth a stop over or three.

I only properly discovered it quite recently, and haven't tried the Jerusalem Tavern yet - but will put that right asap!