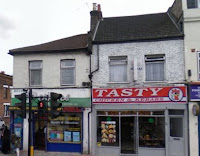 Passing through Plaistow on a bus, I noticed this shop on Barking Road. Until recently a fast food takeaway (the picture on the right is from Google streetview), its sign has been taken down to reveal a previous one: Wallace's, Hosiers and Hatters. It makes a slightly incongruous partner to the remaining bright red sign which still projects above!

The hatter and hosier combination was a common one, perhaps because they both used the same raw material: wool. It has left other visible traces in London, for example a ghost sign in Wimbledon featured over at Faded London.

Any idea what the MAS is above?

Adam, no idea - it appears to begin AR (possibly AK) but the middle is obscured by the sign.