The lighthouses of Cap Frehel 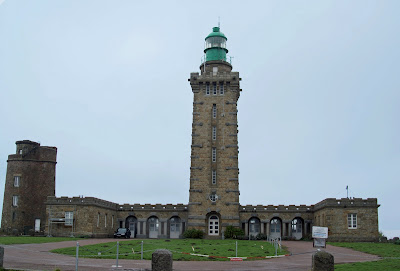 One of the jewels of the Breton coast, Cap Fréhel is famous for its nature, birds, cliffs and fort. However, this rocky section of coastline posed particular dangers for ships entering the nearby port of Saint Malo, so a lighthouse was essential. In fact, there are now two, side by side: the original Tour Vauban and its contemporary sibling.

The Tour Vauban was build in 1702 by the engineer and architect Simon Garangeau, working under celebrated military engineer Vauban. Its light was originally fuelled by coal (or tallow in fine weather), before being converted to fish oil (latterly vegetable oil) when glass lenses were added in 1774. Upkeep was paid for by a tax on ships entering local ports.

A second lighthouse has left no trace: built in 1847, it had a lantern visible for 22 nautical miles and stood 27m high. However, during the Second World War German troops occupied Cap Fréhel and used the lighthouse as an observation post; as they left, they blew the lighthouse up. The Tour Vauban, however, survived and served until a replacement could be built.

The modern lighthouse was begun in 1946 and completed in 1950. It is 30m tall with a light that can be seen 100km away. Only with this final construction was electric light introduced: a plan to electrify its predecessor in the 1880s was abandoned by ministerial decision.
- April 12, 2009