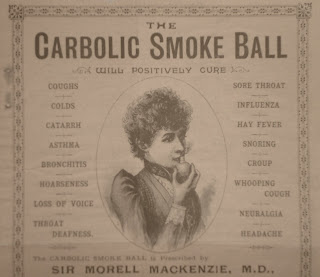 After Meggazones, Carbolic Smoke Balls. This historic 'flu remedy (which didn't work) gained immortality when one Mrs Carlill brought a case against its makers for breach of contract.

The smoke ball was a rather dubious device, to say the least. A rubber ball was filled with carbolic acid and the user inserted an attached tube into her nose. With a quick squeeze of the ball, vapours would enter the nasal passages and supposedly flush out the illness. The modern reader will be less than astounded to hear that it didn't work, but Mrs Carlill was more susceptible (as, indeed, was the Bishop of London, a fellow user) - especially as the company had advertised in the Pall Mall Gazette, promising a £100 reward to anyone who contracted influenza having used the device three times daily for at least a fortnight.

Mrs Carlill dutifully bought a carbolic smoke ball from a chemists' and used the device three times a day for several months, so when she became ill with 'flu in January 1892 the thought of the reward must have been of some comfort. Unfortunately - if unsurprisingly - the company didn't want to, ahem, play ball. They ignored her first two letters; when her legally-trained husband sent a third, the firm responded that she would have to use the ball each day at the firm's offices in the presence of their secretary to qualify for the £100. Supposedly a requirement to protect the company from fraud, it amounted of course to an outright refusal to pay the money as promised.

However, the Carlills were not easily deterred. After all, £100 then was equivalent to some thousands of pounds today. They brought a court case alleging breach of contract - and won, both at trial and on appeal.

Unsurprisingly, the Carbolic Smoke Ball Co had claimed that there was no valid contract; after all, they knew nothing about Mrs Carlill until she demanded her reward, so it was all very one-sided. The courts agreed with the Carlills, though, that when the company made the offer, Mrs Carlill's actions in reliance on it meant the formation of a valid contract. The company was thus bound to pay her £100 when she became ill.

So Mrs Carlill got her reward. The owner of the company, Frederick Roe, went on to form a new, limited liability company. He even advertised that since only three claims had been made for the £100 reward, the smoke ball must be effective - and doubled the reward! (As so often, the devil was in the small print which now made successful claims very difficult). His quack devices couldn't save him from dying of tuberculosis in 1899; Mrs Carlill, by contrast, would live until the age of 96, only dying in 1942. Clearly, while the smoke ball had done her no good, it had done her no harm either.

The incident is more than a Victorian curiosity. It is also one of the leading cases in contract law, still taught to law students today. The Carbolic Smoke Ball Co has also been reborn - supplying gifts for lawyers.