Yesterday, I visited Newington Green Unitarian Church for a discussion on women in politics. This was part of a series of events to mark the 250th anniversary of pioneering feminist Mary Wollstonecraft's birth (more on her tomorrow). However, it was also my first visit to the building itself - London's oldest Nonconformist place of worship still in use.

It was built in 1708 on Newington Green, a centre for non-conformism from the mid-17th century. The facade proudly proclaims that it was enlarged in 1860 - an apse was added and the front altered. Happily, this Victorian upgrade did not involve removal of the eighteenth-century skylight, panelling and box pews (apparently, Wollstonecraft's was number 19).

The church was originally Presbyterian, but became Unitarian under Dr Richard Price, one of the founders of that Society and minister of the church between 1758 and 1791. It served as a cultural as well as religious centre; in the nineteenth century, a conversation society and library thrived there. By the 1880s, there was also a society for theological study. Philanthropic work increased in importance as the surrounding area became poorer, and included a domestic mission society as well as provident societies for young men and women.

Both the area and the church were centres of radical religion and politics. Wollstonecraft herself was influenced by Dr Price, a prominent political preacher, supporter of the American Revolution, friend of Benjamin Franklin and inventor of actuarial life tables. He would be succeeded by the husband of Anna Laetitia Barbauld, poet and educationalist. Given such a history, it is good to see the traditions of feminism and political debate continuing in the church today. 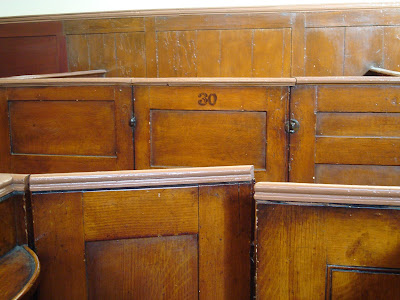 Cor, two of my favourite things in one blog. Writing on the wall and box pews. Thankyou.

I have to say that it looks a little like a courthouse, but then I guess they weren't big on unnecessary decoration.