25 years (ish) of the Thames Barrier

Today is the 25th anniversary of the Thames Barrier's official opening. However, as is often the case, the official and actual opening dates don't match: the Barrier was more or less complete in 1982 and first closed to prevent flooding in 1983.

Before the Barrier was built near Woolwich, London had suffered a number of floods including a major one in January 1928. It killed fourteen people, who drowned in basement flats when the river wall by Lambeth Bridge collapsed. The House of Commons, Blackwall and Rotherhithe Tunnels, and the Embankment were all badly flooded. The water also refilled the Tower of London's moat for the first time in eighty years. 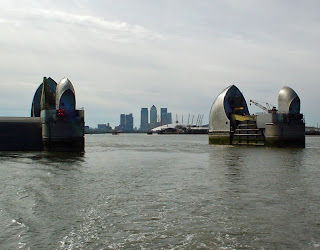 Further serious floods in 1953 killed over 300 people in Britain, the catalyst for the Waverley Committee to recommend a flood barrier. Sir Herman Bondi wrote a further review in 1966, and efforts were stepped up; construction began in 1974.

The Barrier now holds back exceptionally high tides, protecting the city to its west. It is formed of a row of radial gates: they normally lie flat on the river bed, but rotate upwards when needed. Designer Charles Baker got the idea from a gas tap. Although each gate can be closed in as little as 15 minutes, closing the whole barrier usually takes an hour and a half (including time to check the equipment).

On average, there are four closures a year (plus monthly tests): as of February, the Barrier had been closed to prevent flooding 114 times. It is expected to continue to cope with rising water levels until 2070, after which levels of protection may decline.

There are two ways to visit the Thames Barrier. First, take a boat trip from Greenwich to sail through the barrier itself. Alternatively, travel by land for riverside views and a chance to learn more in the Information Centre.