There is so much Victoriana in London (and I'm so keen on the period) that I've broken it down into broad subject areas. The first is transport: it was in the nineteenth century that public transport really took off in the city, changing its shape, sounds and roadscapes for ever. 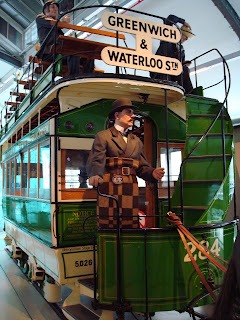 Almost too obvious a choice, but it really is unequalled. Buses, rail, tube: all are here, brought to life through original vehicles, photographs, newspapers and ephemera. Although the musuem begins its story before the nineteenth century and continues to the present day, it illustrates clearly how much of London's present-day transport system was laid down in the Victorian era with the coming of buses, trams, suburban trains, and the Underground to the capital.

This expansion of public transport didn't just change the way we moved around the city, but altered the shape of the city itself. Now, commuting was possible, initially for the middle classes but as fares gradually fell and the tram network expanded, also for the working classes. 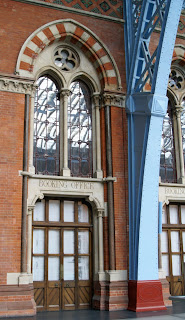 Euston Road formed the southernmost boundary for train lines entering the city from the north, so Paddington, Marylebone, Euston, St Pancras and King's Cross Stations stretch in a row across the northern edge of the city centre. Of these, the most dramatic is surely St Pancras, a landmark building expressing the confidence and exuberance of Victorian railway companies. More specifically, it towers over neighbouring (historically much busier) King's Cross - the boardroom was carefully placed to look down upon its smaller neighbour.

The building facing the street was in fact the Midland Grand Hotel rather than a station building proper; it was originally intended to be even larger, but financial constraints got in the way. When first opened, the hotel was both luxurious and cutting-edge with its ladies' smoking room and lifts. However, by 1935 it had fallen behind the times and was converted into offices and renamed St Pancras Chambers.

Behind, the Barlow train shed was the largest enclosed space in the world when it was built in 1868. George Gilbert Scott continued the exuberant Victorian Gothic style here, while an undercroft was used to store beer from Burton on Trent. Building the station had required demolition of buildings in Somerstown and Agar Town, the building of a bridge over Regent's Canal, the dismantling of St Luke's church and the relocation of human remains in its graveyard.

St Pancras has undergone a renaissance with the arrival of Eurostar. The grandiose red brick building of St Pancras Chambers is to come full circle by being converted back to a hotel once more.

Sailortown
While new forms of transport mushroomed in the Victorian city, shipping remained crucial. With ships, of course, came sailors - and catering for them was 'sailortown', a concentration of alehouses, lodging houses, chandleries and shops buying and selling the exotic. Alongside them were sailors' missions, aimed at ministering to and converting the seamen and prostitutes who frequented these areas.

Today, the Victorian docks have been transformed through wartime bombing, later obsolescence, and recent regeneration. As a result, the riverside is still rich with physical traces of London's sailing heritage but the atmosphere is more elusive. Happily, there is a way to experience something of the nineteenth-century ambience (without the danger): these narrow streets in 1850s Wapping are recreated in the Museum in Docklands.
Also worth seeing: the Thames Tunnel (currently closed but due to reopen in 2010) is a still-operational piece of Victorian engineering - designed for horses and wagons carrying ships' cargoes, first used by pedestrians, then the point at which the East London Line crossed under the Thames and now to be part of London Overground. The Embankment was part of Bazalgette's sewage scheme, but its role in transport was integral with a road above and tube lines below. Take the train from London Bridge to Deptford to follow in the tracks of the world's first rail commuters, and the tube from Paddington to Farringdon Road for the first stretch of Tube. Tower Bridge has been both praised and reviled for its mock-mediaeval stone cladding, but however you feel about its looks, watching it open to allow ships to pass is an impressive sight.