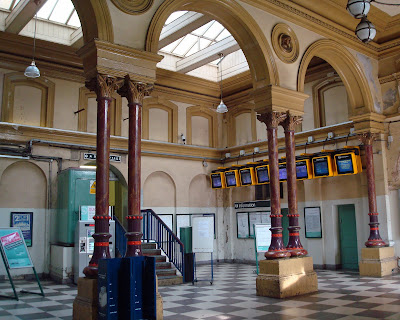 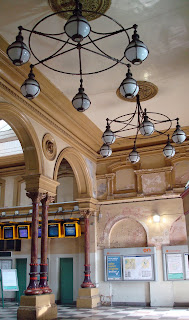 A journey can be as interesting as the destination, especially when it involves passing through somewhere unexpected like Battersea Park Station. As I hadn't been here before, stepping off the platform into the station building was quite a surprise: despite the best efforts of the rail operators to distract passengers with an overlay of garish plastic, the ticket office area is defiantly Victorian. Recent plans to redevelop the station involve restoration of this ticket hall, which is Grade II listed.

The station was built in the mid-1860s for the London, Brighton & South Coast Railway, who have also left their mark on the railway bridge just outside. The roundels represent (clockwise from top) London, the Cinque Ports, Brighton and Portsmouth. However, they are something of a misrepresentation here since Battersea Park served only the South London Line between Victoria and London Bridge. Forced to compete with trams, the railway became electrified in 1909 - with power supplied by Deptford power station. 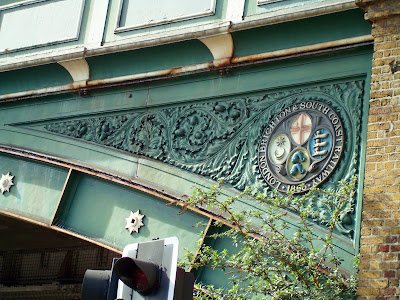 What a gem! In all my years in South London I never went to this station, so thank you. The glass roof looks as if it makes the interior lovely and light.

It is bright - and quite a shock after starting out at Queen's Road Peckham!