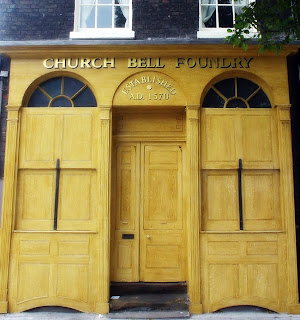 150 years ago today, the bell Big Ben was taken from the Whitechapel Bell Foundry to the Houses of Parliament. It was in a carriage drawn by sixteen white horses, and travelled across London Bridge, along the south bank of the Thames and back over Westminster Bridge to finish its journey in New Palace Yard.

Whitechapel Bell Foundry is fascinating in its own right: it is Britain's oldest manufacturing business, established in 1420* and making bells ever since. The current site has been the foundry's home since 1670 - before that, it was on the other side of Whitechapel Road. It makes church bells and hand bells, while other famous creations include the Liberty Bell which was shipped to Philadelphia and famously cracked when first rung. Although production switched to shell casings during World War II, the bell business resumed with the peace and the foundry was kept busy replacing bells damaged or destroyed during the war.


Big Ben is of course the foundry's best-known creation. Barrister Edmund Becket Denison, who also knew a great deal about clocks and fancied himself an expert on bells, was closely involved in the tendering process and specified a bell of 14 tons, made to his own design and bellmetal recipe. The largest bell in existence at the time was just under 11 tons, so this was a somewhat challenging commission - originally taken up by another company.

However, in an effort to get the best tone, Denison used larger and larger clappers until the bell cracked during testing with a 660kg clapper. Denison, however, blamed the original casting and Whitechapel took over the project - sensibly specifying that a clapper no larger than 203kg was to be used. The metal from the first bell was melted down and poured into a heated mould, where it took twenty days to cool. Once completed, it was taken to Parliament on 28 May 1859. The bell rang for the first time 3 days later.

However, the drama was by no means over. Denison once more installed an extremely heavy hammer, and as a result the bell cracked after two months. Sir George Airy, the Astronomer Royal, came up with a solution: the bell was turned so that the hammer struck sound metal, and a lighter hammer was installed. The crack is what gives Big Ben its distinctive tone.

Denison did not want to admit his own fault in the damage to Big Ben. When he claimed that the crack was due to poor casting, the foundry took him to court and he lost his case - and lost another twenty years later when he repeated the allegation in print. But let's end - literally - on a happier note: the distinctive tones of Big Ben can be downloaded as a free ringtone here.

* Sharp-eyed readers may notice that the Foundry's entrance gives the date as 1570 - that date also appears in the Guinness Book of Records and is early enough to give the Foundry its unique status. However, subsequent research has established the earlier date.

I took these photos during a tour of Whitechapel Bell Foundry: more details of the tours here.

The comments about the cause of the bell - Big Ben - cracking are utter nonsense. When a lump taken from the bell was examined a few years ago it was found that the casting was faulty, containing too much tin, which had made the bell brittle. If Mears had not tried to do the job cheaply it would not have cracked.

Anonymous, it would be really helpful if you could give a source for this rather than just an assertion. Bell metal has to be high in tin and very brittle - it's essential for the sound. The information in most sources refers to the clapper and not the quality of casting, while Denison lost two court cases for suggesting otherwise.

I'd be fascinated to read the research you refer to. (I could understand the Foundry being slow to update their site with contradictory information but am surprised it doesn't appear in other sites/books.)